Paris is one of those places that French residents tend to get to occasionally on various business. It's technically possible for us to get there and back in a day, since the TGV only takes 3 hours. But we usually try to stay overnight anyway and that's how we get to see the capital city. On this occasion, Antonia had a dance rehearsal for a show she will be in, and we traveled up a day early. We didn't take a camera so the only pictures we have are from her sketchbook.
_______________________________
We decided to see Paris's main modern art museum, the Georges Pompidou, even though we have both been there before, and there was some debate as to when we were last there. I am absolutely convinced the last time I went was when I was 19, and Mike may have been more recently.

As many people know, the Georges Pomidou is the one that looks like a pipe factory turned inside out. It has some other 'features' as well, one of which is that it seems very hard to find the main event, that is, the permanent collection of modern art. By the time we got there we had already seen an exhibition of designer furniture in the basement and a retrospective for Pierre Soulages, a painter who is rather keen on the myriad possibilities inherent in black paint, but not much else.

Actually, although I'm being a bit sarcastic, it was interesting to discuss the concepts of abstract formalism with Antonia and to analyse the aforementioned 'myriad possibilities'. She also liked reading the quotes by Pierre Soulages on the walls of the expo. These were supposed to explain his work, and they were also quite poetic. I couldn't help feeling he had somehow missed his true path in life as a poet. OK, I know I'm being a philistine, and he has many fans, etc. I do think his paintings have atmospheric potential, but some 60 of them in a very plain gallery doesn't really bring out those qualities. I guess I don't think they make ideal museum art.

What really grabbed me though, was how everybody strolled through the exhibition quite freely, then came to a halt at the windows with an amazing view over the whole of Paris. Since the external walls of the Pompidou are wall-to-wall glass the view is uninterrupted. Since Paris is mostly a sea of roofs of very similar heights, all the monuments really stand out. Especially the butte of Montmartre with the church of the Sacre Coeur, alternately brilliant white in the sunlight or brooding under the shadow of heavy clouds. Even the French visitors (probably from outside Paris) were awestruck. It might have been an exceptionally good viewing day because of the contrasts from the cloudy sky. 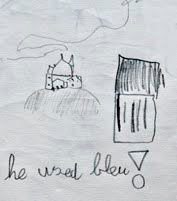 Antonia's impression of the Sacre Coeur and a sketch of a rare coloured Soulages image. Note typical Franglish spelling of the bicultural child (sigh!)
Eventually we did make it to the permanent modern art collection. It consists of two whole floors with probably hundreds of rooms and we made the mistake of trying to go through in chronological order when we are all really more interested in the later stuff. The result was that Antonia just about held out for the first floor, and we discovered that she likes Picabia (?!!), but by the time we got to the really cool stuff, she was dead.

Mike wanted to walk through, but I knew it just wasn't going to work for me to go so fast with her whining at my tailcoats. I did manage to find a really cool thing to do. I noticed this one piece which was the projection of a film onto a white screen on the floor, by Pippilotti Rist, (the title was 'A la belle etoile'). You could walk on top of it and I saw that three kids were there and really enjoying it. So I brought Antonia over. Boy, did she love it! She took her shoes off and danced all over this projection 'rug', chasing the sunrise, jumping over lights, pouncing on images of people's faces, lying on her back with lights flashing over her and I don't know what else. She was completely immersed in the images and loved interacting with them. Maybe I should have billed her as a performance artist and started a collection!

We stayed for four full loops of the movie, until Mike was done walking round. It occurred to me that a less arty version of this type of installation would be a really wonderful addition to indoor play areas for children, that it had educational and exercise potential, and that it might even be possible to get the technology together to produce some kind of 3-D experience. It's true that the film in this case was (dare I say it?) a bit conventional in its post-modernity, including some slightly disturbing features that went utterly over Antonia's head. But the parts that really worked for her could be adapted to all kinds of things. 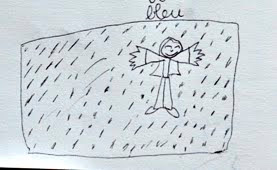 Antonia on the 'rug', and still spelling blue the French way!

After that, Mike called us on the radio to say he had finished. Oh, yes, I forgot to mention, we were using these two-way radios to keep track of each other, and they were much more useful in this setting than they are in the mountains or on hikes. Anyhow, when he called us, we just left. I guess I completely missed the parts of the Pompidou I would have liked most, so it's a good job we parents are programmed to get a kick out of watching our kids have a great experience.
at 12:26