Written by Antonia:
Today daddy and I went to the Melbourne museum. First we went to see some dinosaur skeletons. There were little videos of what they might have looked like in action. Daddy took a picture of me and a big bone a bit bigger than me. Next we saw crystals of all coulours shapes and sizes. Daddy wonders how they got the giant rock with crystals on them into the museum. Then we saw a 3D movie on going threw a lava tunnel. It was thery cool. Then we found lots of real stuffed animals from polar bears to okapi. We found something (that look like a camera-television) that you rotated that showed and gave the name of the animals. We got tired and went to see some mind illusions. It was time to go so we we walked to the tram and went back to the hotel. 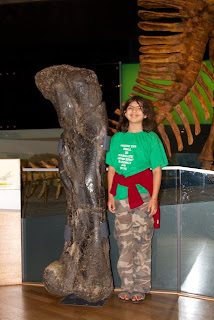 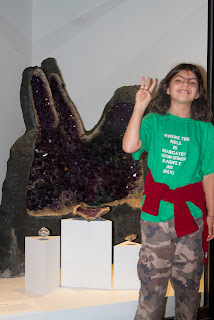 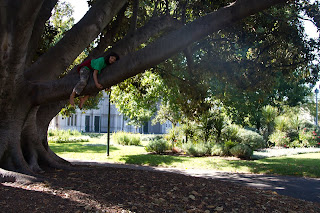 Antonia resting after a hard day in the museum
at 19:00 No comments:

We drove back north from Middleton (just south of Hobart) Tasmania where we had been staying this month. On our way back, we stopped in Launceston which is about an hour from the ferry. We spent the night and since our ferry wasn't until 9pm, we had some time to explore the area a bit. 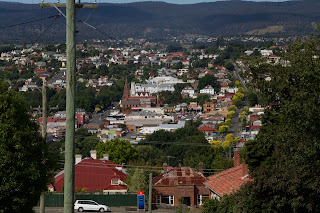 We took this lovely walk in Cataract Gorge which is like a city park next to the town. A couple nice suspension bridges for walkers and an old power plant (now decommissioned) at the end. 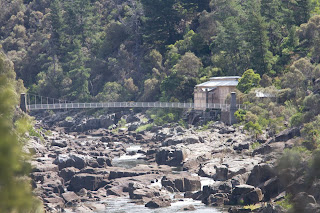 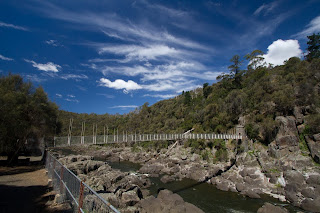 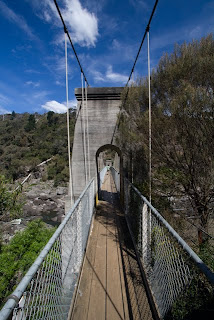 Daddy and I went for an hour and six minute drive to the Cadbury's chocolate factory in a town.  We got lost, then got parked and the air smelled like chocolate.  We bought nine chocolate bars and one long stick of chocolate to give for Christmas. 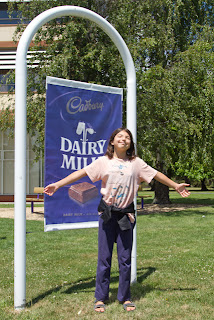 To make chocolate, you have to take the seeds inside the cocoa bean and dry them, then you take their covers off and turn them into cocoa powder.  The machine puts milk in it and turns it into chocolate, then gives it its normal form, dries it, wraps it, sends it, start again... Daddy and I and everybody else couldn't see inside the factory, but we watched a movie instead.
at 08:46 No comments:

It feels strange to be waiting for a north wind for it to get warm, but we are in the southern hemisphere.  We got the north wind today and are frankly hot.  We went for a hike at the very end of Bruny Island, which is perhaps the most accessible piece of wilderness for us.  We have discovered that echidnas are pretty common around here, but it's only when they're hanging out on the beach that they're really photogenic.  We can all throw away all our other echidna pictures now.


In the evening we went to a sitar concert at a local 'pub', Brookfields at Margate, which is really a barn converted into an all purpose restaurant/meeting room/hangout/gift shop.  Although in some ways it looks a bit like the English countryside around here, there is a far higher density of very nice places to eat and fun things going on than I am used to in the rural parts of England that I know best.  The fact of being near a state capital shows, I guess.
at 00:54 2 comments:

Wineglass Bay is supposed to be Tasmania's most beautiful beach, hidden away in the Freycinet National Park.  We had a lovely day for hiking to it, and since you do have to hike, there were not too many people there.  We were sitting in the shade of a tree at the edge of the beach, when suddenly I got that feeling that someone was next to me.  I turned and found a wallaby looking over my shoulder at my sandwich with a polite but earnest expression on its face.  It was a very sweet wallaby, if a bit of a limpet, but I'm afraid it didn't get anything out of us.  After it eventually gave up on us, Mike saw some people give it some apple, and not long after he saw it being sick.  Now he has started going around telling off people who feed the wallabies.  He thinks they are extremely cute and he would like to have one as a pet.  They are certainly very gentle and unafraid.

From Wineglass Bay we crossed the narrow isthmus to Hazards Beach and came back to the car in a circuit.  We never did discover what hazards Hazard beach held, but it did have a lot of beautiful shells.
at 00:53 No comments:


Tasmania is bigger than we thought at first.  We had to book an overnight in a campground cabin in order to see the east coast.  It's still raining on and off today, so we went to the zoo to see Tasmanian devils (and a bunch of other animals).  The devils are so cute, they look like miniature bears - right up until they fall out with each other and start showing off mouths that open as wide as their bodies.  The keeper had raised three of them from when they were tiny, and the cutest thing is to see them attach themselves to the cuffs of his trousers and shut their eyes in ecstasy.  Not so cute is the way they crunch up the bones of the meat he gives them.  Most people know that Tasmanian devils in the wild are suffering from a fatal cancer they transmit to each other through biting.  The idea is that if the wild population becomes extinct, captive breeding programs like the one at this zoo will be able to release a new population of cancer-free devils.  It could be decades before we know how things will turn out.

In the evening we went for a beach walk and saw this atmospheric effect, then Antonia (of course it was Antonia) spotted this fairy penguin.  It is probably a young one waiting for the adults to return in the evening.  Julia went out to see them on an organised tour, and did in fact see hundreds of them waddling up the beach.

Our hostess has a thing about saving water, which isn't surprising because we are dependent on rainwater here.  She was pointing out to Mike that aborigines wash by rubbing themselves with mud.  Today we put this procedure to the test and found it unsatisfactory!  Actually, it seems to have rained pretty frequently since we got here and there is plenty of mud around.  Today, we tried to go for a hike up nearby Hartz peak.  First, we drove down the wrong dirt track for several miles (but at least the car got a thorough 'washing').  Next, we drove to the peak, got out of the car and got back in again.  It wasn't quite a blizzard up there, but heading in that direction. We drove down again, found a place where it was much warmer and began picnicking in the sun.  Then we retreated back to the car to finish our picnic in a rain shower!  That is very typical of what the weather has been like here so far.  We did finally manage to go for three very lovely short walks, during which we only got rained on a bit.  Despite the constant mixture of mud and water, we still felt we needed showers when we got back!
at 00:49 No comments: 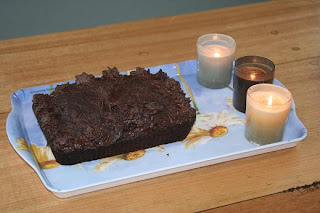 Julia went on a cruise around the lower tip of Bruny Island and saw a humpback whale.  I stayed home and tried to catch up on various chores while making Mike's birthday dinner: oyster chowder, followed by roast turkey with all the usual trimmings followed by chocolate cake.  I am getting better at just fitting in to any kitchen and supply situation!  The internet is a bit slow here, which is frustrating for all of us, but this will not last.  Mike has already made friends with the owners and is planning to spend the rest of his time here helping them lay super high speed mega access.  Everywhere he goes, he leaves a trail of improved internet!
at 21:29 No comments:

Somebody (who will remain nameless) called us at 4am with a computer problem that lasted for an hour, so we all got woken up and are exhausted (but on the plus side, I know all Mike's secret passwords!).  Meanwhile, Mike got pneumonia taking the call in his underwear, unless it's just the flu?! 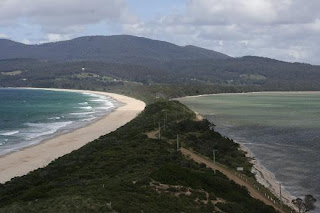 The weather is nice! It's amazing.  We took the little ferry to Bruny Island immediately opposite us.  It is really two islands joined by an isthmus.  We visited the penguin colony on the isthmus and even though the adults were all out, we saw two young penguins in their burrow.  We hiked through Tasmanian woodland, past lagoons to the beach.  The trees here are all either in flower or have a new season's growth that's a different colour from the old.  The result is that the trees are quite colorful - actually they look as if they've been sunburned.  We found another echidna and are starting to get blase about them.  This one did not really want to pose for the camera.  It preferred to turn its back on us and bury its snout underneath itself, but we were more patient than it was.  We hiked to the beach which was lovely and unspoilt and actually pleasantly warm in a sheltered spot with the sun out. 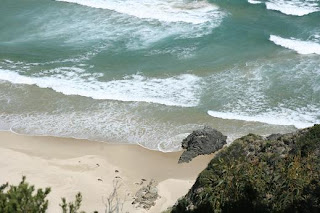 When we got back, there was a kookaburra (I think) hanging around at the end of our driveway.  It took off, flew into a tree, dropped a foot or two then recovered.  I am suspecting them of not being the cleverest of birds!  Mike went to borrow an oyster knife and began shucking 24 oysters to make oyster chowder for his birthday.  I suppose he must be feeling better, but when someone callled from France to try to sell us solar panels, we remembered to turn the phone off.
at 21:27 No comments: