2nd trip to Paris for the dance gala

We zoomed up to Paris for the long-awaited dance gala in which Antonia was to be a gnome. She really looks like one in this picture doesn't she? That's because, for once in my life, I bought her some clothing I thought was cute. Usually her wardrobe gets swamped by other people. 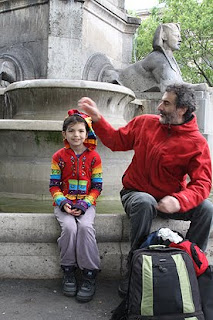 Antonia does Chantraine dancing - we still don't really quite know what that is all about, but it's her thing and it seems to suit her. I'm really glad we managed to make time for all the preparations for this gala for her. We had the incredible experience of seeing the Chatelet Theatre filled with hundreds of little girls in leotards, peering out from the boxes to search for their parents as they waited their turn to dance. The organisation of the people doing the gala was incredible, the kids were great, and so were the adults. Some of the adult dancers were professional, some not, though all were really good. Either way, the movements and body types (and ages) were much more individual and varied than you see in most professional shows. I liked the less mechanistic style of the performance. Even Mike enjoyed it - he ended up sitting next to the photographer!

The day before the show we came up on the 7:25 train, and went round the gardens of Versailles. The buildings were closed because it was a bank holiday, but we just wanted to get somewhere a bit quiet to experiment with our new camera. I don't think we have the hang of it yet. I got one picture I liked but Mike says it is bleak. Personally, I think it might be the weather which was bleak. 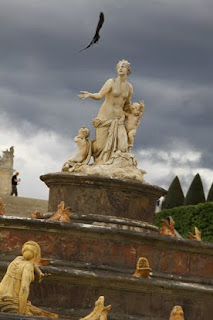 Most of Sunday was spent getting Antonia's hair to a position where it would stay up and putting food into people's mouths when they became available, with little regard for actual meal times. At the end of the show (which overran, of course), we made a wild dash for the train back to Grenoble. I was convinced we would miss it, but by some miracle we didn't. We couldn't help wondering how easy it would be to find hotels in Paris at 9.00pm on a wet Sunday night. And how much that would cost. We got back after midnight and are still exhausted.
at 21:32