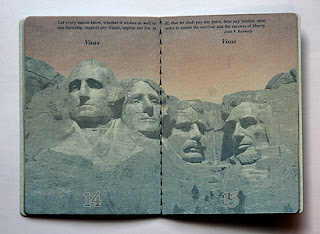 Mount Rushmore seems to have been created in the same artistic spirit as the new US passport.
The nice thing about having a blog is you have a clear record of when things happened.  If I hadn't recorded the date we went to apply for Antonia's US passport, I would never have believed it took the best part of 4 months to arrive!  OK, they did have to send it from Lyon to Paris to London to Paris to Lyon to us.  I don't know why they couldn't cut out a few of those steps, they just couldn't.

I think Mike was starting to get a little anxious about this passport and we joked about calling the consulate and crying at them:  "Oh, noes, we've been waiting for so long, we fear our daughter's identity has been stolen by terrorists!!!"  When he did call them the lady at the consulate said she was sure she would never have said it could take a few weeks, she meant months!

Anyhow the passport arrived last week and it reads a bit like an Usborne picture book of the USA.  It has different pictures on every page of things like the Statue of Liberty, Mount Rushmore and an American Bison.  You could practically use it as a checklist of Things To See. Also, it has some dinky little quotes on each page.  I wondered if it was just for kids (or maybe just for 'foreign Americans' like Antonia, so they can have an image of the place).  But apparently it is for everyone and Mike's new passport will be like that too when he gets one.  It's a bit of a kitsch concept, and this being America, I'm not sure if it's supposed to be some form of cultural propaganda, or if they just thought it would be nice to decorate all the blank pages.  I somehow can't imagine my new French passport with the Eiffel Tower, the Pont du Gard and a picture of an old man in a beret riding a bike with baguettes strapped to the back! I rather expect it will be a lot plainer. Still, Antonia's new passport may well be a future piece of collectible Americana.
at 09:43