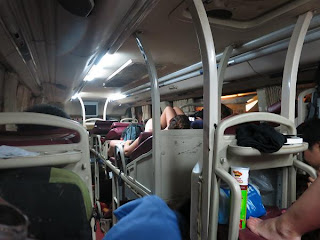 I took my first ever sleeping bus from Nha Trang to Hoian and am now about halfway up the country of Vietnam. What can I say about the sleeping bus?  It wasn't exactly like in Harry Potter but I was comfortable enough.  I'm not so sure about the people who got on last, by which time there were more people than beds (well reclining seats, really), which seeemed to precipitate a major row between the driver and the assistant.  In Vietnam, if you book a bus through your hotel, you usually get picked up at your hotel and herded to your bus in a minivan, which is a very good idea for making sure tourists don't get lost on the way.  It takes a while though, I'm sure it was about 2 hours between when I was picked up and when we actually left Nha Trang.  But the most important thing is, in this case it made the difference between getting a bed and getting on a the bus station by which time they were all taken!
at 21:30