Food:
One of our concerns about long term camping in the US is how we're going to manage to eat healthily. I'm not sure if Spain is a good test for this, but things went OK so far. I only cooked dinner on two nights, but it was an easy matter to buy a ready-made tortilla and a bag of mixed vegetables in the supermarket. We had fruit and pastries for breakfast. We could easily have had all our meals in the camper, but actually we ate out quite a lot, and Spain is also good for us because of the whole tapas phenomenon. It's nice to be able to just order two or three really small plates of things. There again, I'm not sure how this will map to the US. We were having a long conversation about US portions last night, because our airport hotel thinks that half a chicken (literally) and a plate-load of chips qualifies as a 'snack'. We shared it! 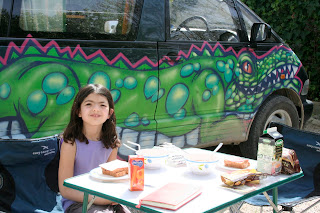 Antonia waiting for dinner!
Housekeeping:
We were out for a week and we were very careful about keeping ourselves and the van clean and tidy. But after seven days, it was definitely time to get the van hosed down on the outside and vaccuumed and dusted inside. Also to do the laundry! We skipped this on the basis that we had just enough clean clothes to get home.

Budgeting:
I really wanted to keep accounts, but added to all my other chores, it was just too much. I would not have had a spare second. Maybe I can teach Antonia to do it? Maybe it will be easier with Mike to do some of the work? Anyway, although we have been looking for inexpensive campervan rental in Europe for some time, and Wicked Campers seems to fit the bill, I'm not sure if it's entirely as cheap as could be desired. The cost of camper + campsite off-season is about 45 Euros a night, but to that must be added the extra cost of gas for such a large car: at least 20 Euros per fill-up over a regular car. I have to say, I would have liked to drive less though. Anyway, in the high season the cost of camper/campsite leaps up to more like 80 Euros a night. It becomes quite viable to drive a small car and find an inexpensive hotel at that rate! 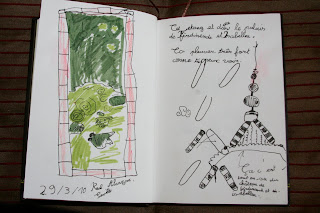 A page from Antonia's field book
Security:
I know Mike is always quite concerned about this! We didn't have any problems. The only things I was systematic about taking from the van were the camera, my netbook (but not the battery for the netbook, unless I thought I might use it) and my purse of course. Most of what got left in the car was wires and chargers (and clothes, etc...) I did notice that it's easy to keep everything in the camper out of sight!

Education:
This is more my concern! I think things went rather well, perhaps partly because we had some driving time every day, and Antonia used that time for work. She did some maths and some reading every day (alternating a French and English book). I set a quota for writing in both languages which seemed to work quite well. I feel as though, given the advantages of travelling, a minimum of reading, writing and 'rithmetic is OK. She is drawing and writing in her field book when we visit places, and is writing a book about dragons, which is currently at the end of its 6th chapter. That's a very homeschooly thing to do! I'm not sure how things would go without the driving time. And there hasn't been much checking of work by me. It's great that Antonia's working independently, but I know for a fact that there are a lot of spelling mistakes! This is where Internet access would be good, because there are a lot of interactive things that make sure the child is actually getting things right! 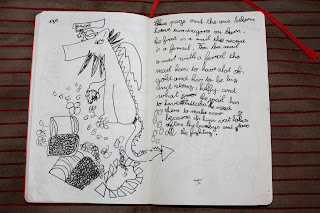 A page from the Dragon book!
Internet:
Intermittent and unreliable, but getting better all the time I think. In some places we had to pay for Internet, in others it was free, in others, unavailable. I would prefer to have mobile Internet available all the time, anywhere, even if I have to pay (a reasonable sum), and preferably a reasonable connection speed. I think things will improve slowly. It says something for progress that I was more or less able to maintain a blog on the road, without setting foot in an Internet cafe.

Campervan versus other options:
I can tell that a campervan, whilst perfect for two people is going to be very cosy for three. We will need a tent! But in terms of driveability, it has a huge number of advantages, because it's basically the size of a large car that's been modified. I didn't have any trouble driving it beyond the automatic/right hand drive thing. And although I whined about that a bit, Crocodile was actually a better drive that the sorry excuse for a coal barge we rented in New Zealand. One very major issue with a campervan is that you can park it in a regular carpark or on the side of a street, which you can't with a caravan. I also noted that a large car to campervan conversion is quite a feasible thing to do, if you have a large car you don't mind taking apart. I really think a final assessment on whether this is going to be a good option or not for us in the US is going to depend on the cost of hiring a regular car versus the cost of a campervan, because I think it wouldn't be nice to feel obliged to camp all the time, having paid for a campervan! 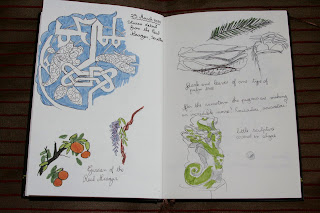