Return to the Malva Rosa

Our trip ends as it began, on the beach at the Malva Rosa! 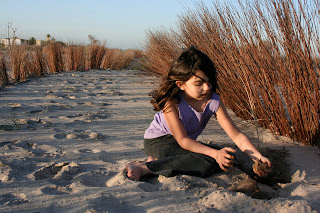 It was really amazing how we just flew from Jaen to Vaclencia and I actually enjoyed the drive. It could have something to do with the long, straight, empty autovia de Extremadura. It could have been giggling at Gamine the GPS squeaking with horror as I crossed apparently empty fields at 120km/h. This motorway has just been finished, and she did not know about a whole stretch of it. It could be that I am finally getting used to driving Crocodile, who, after all, gave me a lot to get used to: steering wheel on the wrong side, automatic, large, ... Anyhow, we reached the Malva Rosa with a whole afternoon in front of us. Finally, I was able to relax and draw plants! It has to be said that by the evening, Antonia was somehow so tired that she was literally falling over things! Hmmm, ...

Here are the swallows nesting in the Malva Rosa reception area: 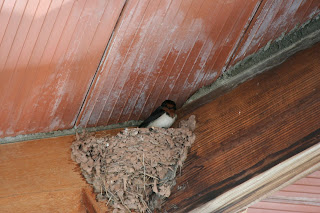 I have to give the Malva Rosa campsite a special plug. It might not be quite true, as the lady at reception seems to believe, that everywere else has terrible weather and is simply not worth going to. But her belief that this is the best campsite in Spain may well be justified. Other campsites we went to were basically parking lots for caravans, and were only pleasant because they were empty, or nearly. The Malva Rosa is a sort of botanical paradise right on the beach. This, for example, is taken from the kids' play area: 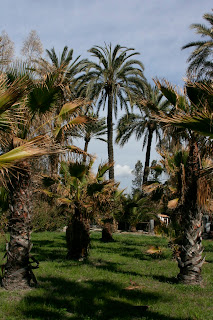 It has a pretty nice bar/restaurant, and I think a number of facilities we didn't try. I would love to go back there. P.S. Although we just turned up, you probably need to book in high season.
at 08:19