Off to Cordoba, for the culmination of our medieval explorations, and also of our 'religions of the world' topic. We spent ages in the Mezquita, trying to draw bits of it, then wandered around the town a bit. 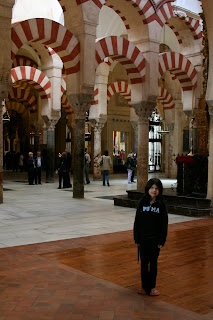 Cordoba is like Seville: there is a modern sprawl and an old quarter which is very touristified. Except I remember the modern sections of Cordoba being quite nice actually. In the afternoon, we had to wait for the Sinagogue to open, so we visited a small museum of Sephardic culture. It wasn't very bit, but had an interesting collection of menoras, and some beautiful modern paintings dedicated to medieval women of Andalousia, mostly poetesses, I think, of various cultures.

Our drive to Jaen was quite interesting because Gamine the gps, picked the shortest way. Actually, it's the way I would have chosen, looking at the map, but I wouldn't have stood a chance of finding it by myself. When Gamine told me to leave the motorway and turn right into what appeared to be a cart track, I demurred at first and went to get gas instead. Then, I decided it would be an adventure, so I went. It turned out that the cart track really was the main road to a whole bunch of places. It had once had tarmac, but not it just has signs warning you of holes in the road, and suggesting 20 km/h as a reasonable speed limit. I managed to go a bit faster than that most of the time, and it was kind of fun. There was nothing between me and the fields and olive groves but a ditch.

Now for an evil secret, we are actually sleeping in a hotel tonight. This was planned, partly because there are no campsites in my book between here and coast, partly because I figured we might need a bath by now, and partly because I wanted to give Antonia the experience of staying in a castle and behaving nicely at dinner! We have just had a two hour bath, and are chilling out till dinner at 8:30 pm.

I stole their picture! Hopefully, they will regard it as free advertising.

Tomorrow, I'm supposed to drive about 500 km. Urrrgh! I expect Antonia will make great progress on her book about dragons!! We would like to get back to the Malvarosa campsite.
at 20:30