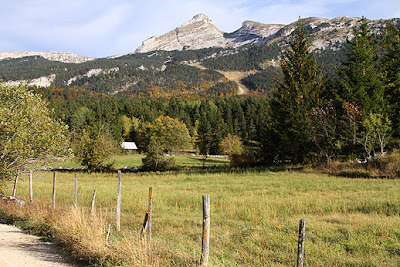 We may not have started our travels but we did get away for a full-day autumn hike in the Vercors.   We had lunch in front of a view slightly wilder than this one, while I wondered how much Yosemite will look like this.  The wilder part of the Vercors plateau is a maze of interconnecting paths, but they're quite will signposted, though you can't always be sure what the signs mean.  We had set off with no real plan, so we followed interesting seeming signs at random.  First, we went to the 45th parallel. 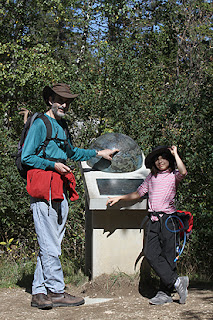 It has a nice sculpture (which is just a bit south of the actual parallel, according to our gps).  On the globe, just over France, there is a label saying "Vous etes ici", for those who are really lost, I suppose.  If you follow the parallel around, you find yourself in Yellowstone.  Maybe we'll be able to make a little collection of 45th parallel monuments if they happen to have one in Yellowstone also.  Just beside the parallel monument there is a memorial to a resistance group who had a camp here in 1942.  Somebody had placed toadstools on it, where you would normally expect to see flowers.

After the parallel we decided to follow signs to Grotte Barnier, especially as it turned out that Mike had a flashlight.  The way these signs work is a bit special: there is a whole network of posts, each of which has a name label at the top, and some pointers to other places at the bottom.  The pointers take you to the post with that label, so there is a post labeled '45th parallel', some 25 m from the monument we saw, and another post labeled 'Grotte Barnier'.  When we got to this post there was manifestly no 'grotte' in the immediate vicinity.  So we got out the map, and discovered that it was up a path, somewhere off to the right.  We went, we searched, we found no cave.  Just as we were about to give up, we remembered that Mike has an internet connection with his new phone, so we looked up 'Grotte Barnier' and, hey presto, right there in the middle of the mountains, we had a photo of what we were looking for, and detailed instructions of how to get there! 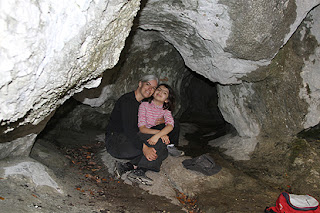 We still might have had a hard time finding the cave, but Antonia, who has the sharpest eyes of the team, suddenly spotted it from the path.  It was really small, but at the back there is a small spring.  Actually, what we found was a mud 'dam' some 10 metres in, holding back water deep enough to cover our shoes.

The interesting thing is that when I took a closer look at the website we found, one of its important purposes is to cover possible supplies of water in the Vercors.  This is always a problem on the plateau for people who are taking longer than day hikes as there is no permanent, completely reliable supply. The site we found records the Grotte Barnier spring as being completely dry on 15 August 2008.  In early October 2010, after a fairly wet season, we could not even get near the back of the cave!
at 23:02