I am in the process of transferring travel stuff from my old travel site to this blog. This is the trip where I got culture shock in the USA. Hope it doesn't make too many Americans laugh at me too much!

___________________________
On our last day in New Orleans we took the car and drove out to see a few of the old plantations. As we first left the city we drove over a new highway that was raised on stilts above the water, rather like a bridge but too long to be called a bridge. After we left the water we drove through thick uninhabited woods. It was a particularly beautiful road and large, modern and brand new in appearance. When we had to leave it, it was a different matter altogether. The road that led to Oak Alley plantation was often only one track wide and it was hard to believe that it could possibly lead anywhere. Strung along it were a few cabin style homes. 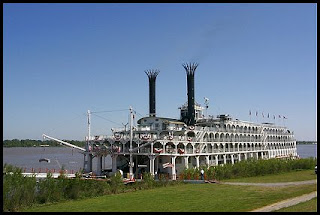 The first thing we saw when we reached the plantation was the steamboat in the picture above. At first we thought this was part of the plantations accessory attractions but we soon discovered that it is a tourist cruise ship on the Mississippi. For a price, you can book a room on this ship and visit various sites up and down the Mississippi for a price. Oak Alley plantation is actually most famous for the the very ancient oak trees in the other picture. We were told that the origins of the alley are unknown but they precede the existence of the plantation or of any major habitation in the area. In the days when the plantations were active the whole of the land along the Mississippi was divided into thin strips on both sides, each of which was a different owner's plantation. Many of the plantation owners were first generation immigrants from the European upper classes. They found life in Louisiana hard. There was the constant risk of flooding when the Mississippi rose over its levees (earth walls intended to restrain it), incredibly hot summers and a number of diseases that were fatal at the time. For the most part they attempted to recreate the lives they had had in Europe, importing furniture and objets d'art when they could and socialising with their nearest neighbours.

Oak Alley still has fairly large grounds which we wandered through freely, but to visit the house we had to wait and go with a group. We were shown round by an extremely prim southern lady in a long skirt and white blouse, who had a tendency to look askance at anyone who did not behave as if they were in class at school while she was speaking. Among the more interesting features of the house were the absence of an indoor kitchen, the spare bedroom shared between guests and the sick or dying, and the fly catcher used at the dining table. 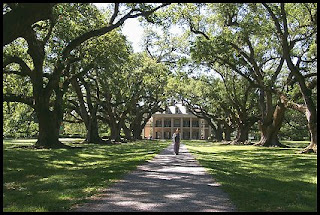 When the plantation system came to an end it was largely replaced by the oil industry and strange metal chimneys and vats line most of the river now. We had decided to visit one more plantation on our way back to New Orleans, but as we drove up and down the river side all we could see was oil and more oil. Eventually, we decided to inspect a clump of trees more closely, and there, in tiny grounds, completely dwarfed by the surrounding industrial buildings was what remained of the plantation. When the land had been sold to an oil company, the owners required the buildings to be preserved, and this they were, though minimally. Of course, many plantations have been lost completely. The interesting features of this plantation are the two water cisterns that flank the building and that support the internal running water system. A few of the cabins once inhabited by slaves have also been preserved, and the poverty of their existence is evident.
We only had time to see two plantations on this trip, but we felt we were starting to get the hang of what all the others would be like anyway. We were actually surprised by the lack of historical information available to the people who arranged the visits, as though, although the houses were preserved, little or no research was being done into their past. At this point we had to return to New Orleans, because we had managed to get a reservation at the famous K-Paul's restaurant, but only at the cost of having dinner as early as 5.30 in the afternoon. The food was again excellent, and we were actually glad to get to bed early, since we had to leave for the airport at about 5.00 the following morning.
at 13:54