I am in the process of transferring travel stuff from my old travel site to this blog. This is the trip where I got culture shock in the USA. Hope it doesn't make too many Americans laugh at me too much! 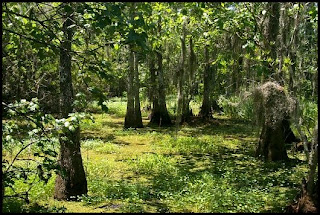 On our fifth day we picked up a hire car and went to visit the Baratria reserve, a bayou. I have always wanted to see a bayou, since I saw the Walt Disney film the Rescuers as a child. Now, I stood in front of a signpost, which described bayous as gloomy, spooky and mist-filled and tried to put this together with the bright, sparkling emerald coloured scene before my eyes.

The nature reserve is a bit smaller that I had expected but carefully arranged to be educational. In fact, unlike European nature reserves, it is so serious that there is nothing on sale to eat or drink, so it was lucky we had brought something with us. The wooden boardwalks form marked trails which keep you away from the wildlife and prevent you getting your feet wet. You begin on fairly dry land, where there are the barely visible remains of a native American settlement. As you go lower and lower the ground around you gets wetter until eventually the trees give way to more or less open water.
We saw several alligators, though all of them were extremely small, like the one in the photo below. We also saw insects and birds, and, thanks to the sharp eyes of a ranger, one rather poisonous snake. 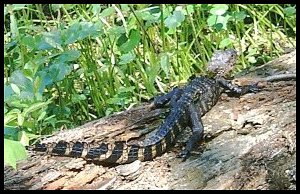 After we had exhausted the walking possibilities of the place we thought we would try some of the canoe trails they have marked out, but it took us a while to discover where we would find canoes. Eventually we set off driving down the road and some miles from the reserve we reached an isolated cafe and canoe rental place. Arrangements for canoeing are actually quite complicated. Having made contact with these guys, we had to wait until they were ready to drive a canoe to the reserve for us and launch it, and when we had finished canoeing, one of us had to drive back to get them to come and fetch their boat back! It has to be said that the reserve only allows for a couple of hours canoing at most. Although several trails are marked out, the majority have become overgrown and would be impossible to use without a machete and serious determination. After a couple of hours we had explored all of the reserve that was possible and seen a few larger alligators and we were ready to call it a day. The waterways were much more exposed than the path, and we were starting to get a bit sunburned.
at 13:36