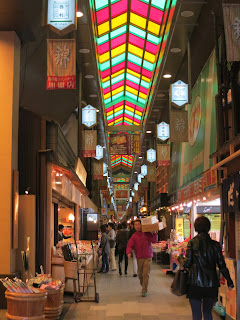 Yesterday, it rained all day so but today is fine so I decided to go for a walk around Kyoto.  The city is built to a grid system with many narrow alleys (like the one I live in), the buildings are mostly terraces and low rise houses, and at first I thought it was going to be nothing but boutiques and little restaurants.  Then I found the arcade, which I suppose is a series of covered alleys with even more boutiques and small grocery shops. Everything is very, very nice, even the fruit and fish are beautifully presented.  The people who run the food shops stand at the entrance bowing to passersby, not at all like the rest of Asia where they greet you with a communication that basically means 'get over here and buy something NOW!'  So far, Kyoto lives up to Japan's reputation of being refined and polite. 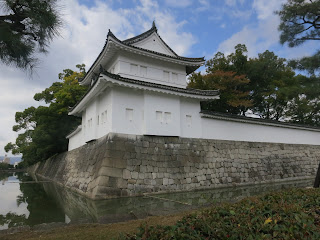 I was going to do a lot of walking today but then I happened on Nijo Castle so I went in to explore that instead. I remember it coming up in one of my courses as an example of how some architecture expresses status and sets out to dominate the person who wanders in to it.  The main way most castles do this of course is by making sure nobody wanders anywhere without a proper invitation.  This is still the case really: visitors don't get to wander around at will, even through the gardens and are encouraged to stick to a single route. But I suppose that's more in the interests of conservation. What is really meant is that Nijo Castle advertises the fact that you can't force your way in with huge irregular blocks of stone, and lets you know your place in the hierarchy when you do get in by making you wait (or not), then having you received in one of a strict hierarchy of rooms, all of which contained more tatamis and painted screens than you could afford yourself.  Standard stuff, really. 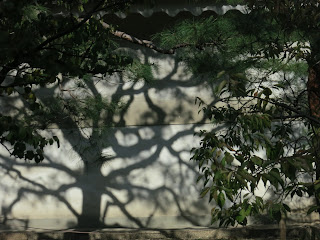