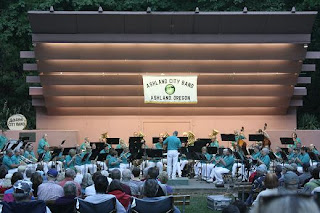 We went to an Ashland City Band concert in Ashland in the evening and sat out in the park with a picnic.  They started with a brass quintet before the full concert band so I actually thought we were going to escape the whole pledge of allegiance/national anthem/invocation thing.  Hey, I was thinking this is a more liberal modern kind of area.  But it was not to be, suddenly with no warning everybody started getting to their feet.  How do they know?  The guy didn't announce the national anthem until after they were all standing up.  I don't know how many times I have heard the US national anthem over the last few months and it's got to be one of the least memorable pieces of music  I've ever encountered.  I wouldn't recognize it if I met it in the street, except for everyone standing frozen with their hands over their hearts.  Maybe that's why they have to play it so much.

It was a really nice concert and its always pleasant to be outside listening to music.  The band were pretty good, especially considering that they are not professionals.  I think really there is only one thing I would have to say if I'm being honest.  It's that the people aroud here are a bit like people in everyone's fantasy of an English country village.  They aspire to have things 'nice'.  They make a lot of art and music but they do it 'nicely'.  So it lacks all the edge and gravity and fire that 'touches man to the depth of his soul or raises him to the level of the gods', etc.  Also, they could have put a bit more welly into it.  I don't think it's a matter of talent or practice or professionalism, especially, I think it's down to what's in people heads.  But anyway, it was very nice and I had a nice time : )
at 18:23