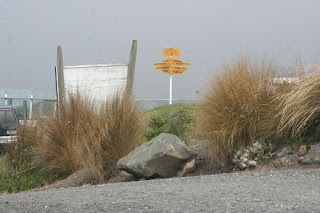 Now, we're off on a six-day driving tour of South Island, aming to end up in Marahau on Saturday.  We are really not going the short way. We had an uneventful drive from Queenstown to Invercargill.  All we can say is that the traffic cops in New Zealand are pleasant and polite (ahem).  We got to Bluff, which is the point from which the ferries go to Stewart Island at the very southern end of South Island.  The Maori legend goes that Steward Island is Maui's anchor, South Island is his canoe, and North Island is the fish he pulled out of the water.  This is the anchor chain. 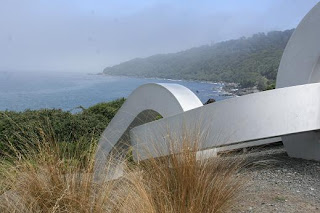 We had fish and chips in a little cafe just above the anchor change, and when we came out we got chatting with some people who were also having fish and chips just outside.  Before we knew it we had an invite to stay at Terra's house in Invercargill for the night, then at Jeff's in Dunedin the next night.  First we were going for a couple of short strolls, along the coast, then through the woods, then a quick drive and a walk over to the ship's graveyard.  There were lots of people around today, but I honestly hadn't quite realised it was Waitangi Day until I saw it in the newspapers.  The Waitangi Treaty founded New Zealand as a nation, and since it is essentially a treaty with the  Maori they are at the forefront of making sure it gets respected.  Therefore sometimes thing get a little rough on Waitangi Day and this year was not an exception. 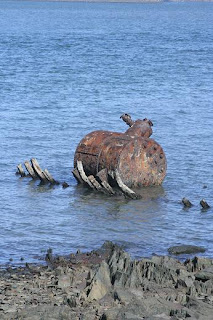 We had a very nice peaceful time getting to know Terra and her daughter and finding out all about the New Zealand education and health systems.  We went out for burgers at Devil's Burgers which must exist to match Hell's Pizza, I think.  I was so tired, I think I went to bed about 9.00pm but Mike and Antonia stayed up chatting till just after 11.00.   Wow!
at 08:58