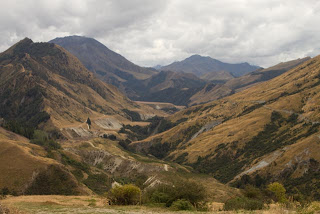 Our host gave us a lift to the start of a walk called the Moonlight track which follows the curves of a river to Moke Lake.  Then he picked us up at the other end which is ultra nice of him.  The walk is fairly flat so we found it extremely pleasant and easy.  Whilst not exactly crowded, it was surprising just how much was going on.  There were jet boats on the river, a bungee jumping station arranged just above it, some groups of horse riders and a few people in four wheel drives who were doing something, but we weren't sure what.  There was also a smalll flock of young sheep who looked as though they thought it was all a bit much.  When we got close to the lake, the valley opened out into something really beautiful, all golden and dark greens with a bright blue lake.  These days the kiwis know exactly what to do with an environment like this - make films in it!  Sure enough there was a film crew at Moke lake. 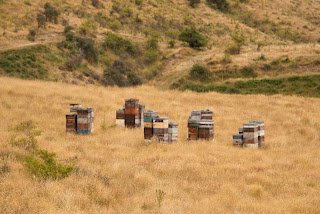