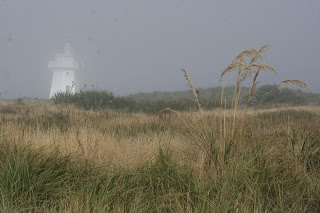 Today we drive from Invercargill to Dunedin.  Stop one on the Catlin heritage trail: Waipapa lighthouse, with rolling mists off the sea and a small family of sea lions.  Two of the females went into the sea when they noticed us and hung around there playing.  This last one eventually decided to join them, but I guess she was favorite wife, because the guy there didn't want to let her go and spent his time trying to herd her back. 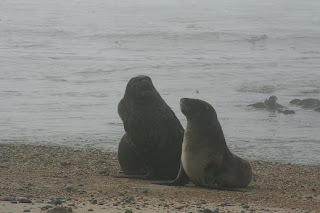 Stop two: petrified forest at Curio Bay:  well it's not quite like the petrified forest in Arizona but it's still pretty cool.  The signboards say that the forest was petrified in months after volcanic mud floods covered it.  One of the coolest things here is a long bore channel type of thing on which you can watch the kelp rise up and down as the waves come in. 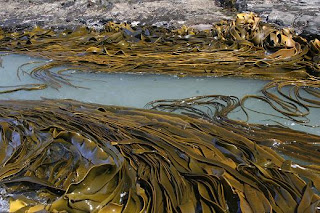 Stop three: Purakanui Falls and Jack's Blowhole.  The falls were easy to find and pretty enough, though actually, the ten minute walk through the forest around them is more interesting. I tried to learn to draw fern trees.   Jack's Blowhole was at the end of a 20 minute walk starting from Jack's Bay, which is a 20 minute drive through a network of badly signposted unsealed tracks.  It is a deep hole with vegetation growing on the cliff walls that line it.  Very beautiful and worth hunting for.  I don't know if Mike got a good picture of it, I just got more kelp. The coast here is gorgeous with lots of wide empty beaches we didn't quite have time for.  We were photographing one when we met some people who came off a cruise ship in Dunedin.  They told us the Zaandam, the ship we took across the Pacific is in port.  We were excited at the thought of seeing it again, but we soon realised we wouldn't make it to Dunedin in time. 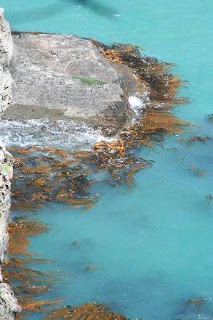 We were going to stay with a guy we met up with yesterday, but he wasn't well, so we just checked into the local campsite and went out for Thai food. Today was one of the most fun days I've had road touring, but I was still exhausted, barely coherent and starving.  I think it is the first time in a Thai food restaurant that our family has actually finished all the food we ordered.
at 06:09