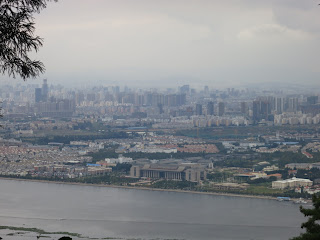 We're in Kunming China.  I must say it's a relief to be in a modern city after much of SE Asia.  I had no idea what to expect from China.  Kunming is modern, clean, just like a European city.  There's lots of night life.  Great public transportation.  The air is definitely polluted as is the lake but they're actively working on cleaning things up.  Amazingly enough, virtually every single motor scooter in the city is electric.  They are working on converting the busses to electric and maybe eventually the cars.  The people here know there's a problem and they are actively working on it, politics aside.

Today we took the public bus (which cost 1 yuan or about 17¢) out to the nearby mountains and walked (from 1840m) up to the Dragon Gate temple at the top (2175m).  It's roughly like walking up the Bastille in Grenoble but prettier in a way.  There's all these little temples along the way.  The route is completely paved with lots of steps.  Very easy walking.

Initially a man on the bus told us to follow him.  He spoke just a few words of English.  It was quite hard communicating but he was genuinely very friendly.  Eventually we met a group of foreigners, 2 Canadians, a Swede and a local named Ming. They took us in and we spent the read of the day with them.  We ate lunch with Ming's family at a tiny Buddhist vegetarian restaurant half way up this mountain in a temple, it was amazing.  We then continued to the top, then walked down and took a bus to the bottom the rest of the way.  We then went to dinner with them in a typical Chinese noodle place.  Wow, people are really friendly here, we were amazed. 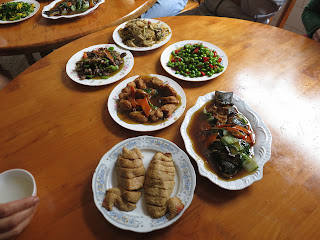 I'm also impressed with how easy it is to get around here.  The language does pose some problems but we have managed to find someone to speak some english when needed.  The buses and trains are very well connected and the hotels we're staying in are about $30 a night.  I really thought we'd need some sort of package tour here but so far, it's not necessary.

Tomorrow we take the night train to Chengdu.
at 03:44