Overland to Hanoi on the "Bus from Hell"

Antonia and I continued our overland adventure from Bangkok to Hanoi to meet up with Penny.  This part of the trip doesn't have a train.  In it's place through Lao is an overnight bus.  Getting from the train to the bus was a bit of a mess.

The train had arrived about 9hrs late and the visa office was closed at the train station.  A bunch of tuktuk drivers were hawking around and wanting to charge us a lot of money to take us to the Friendship Bridge per person.  I went ballistic and a tuktuk driver stepped up and agreed to take us to the boarder and then the hotel for 400 baht which is about $13.  Doesn't sound bad but this is about what you pay for a tuktuk for the entire day.  Eventually we made it to the hotel after a long dusty smelly ride.

The following day we I booked the bus at a local agency near the hotel.  I paid US$40 per ticket.  (I later learned that each agent has their own price for this same bus and some agents were charging half this price.)  The bus company agreed to send around a shuttle at 5pm.  Meanwhile we set out and walked around downtown Vientiane.

This shows a typical telephone pole in Vientiane.  As you can see, the term "rats nest" certainly applies here as it also does in Bangkok. 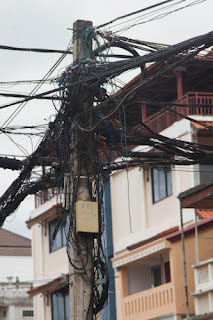 This appears to be the central office of Vientiane.  Nobody tried to arrest me taking this photo! 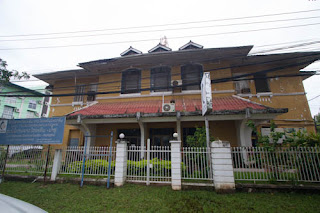 Some of the tuktuks were quite nicely decorstaed: 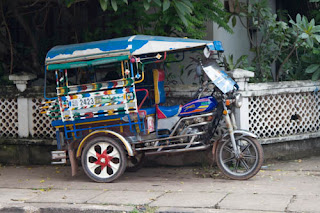 A typical street.  Vientiane is very much a city.  The streets are almost wide enough for 2 cars and there are sidewalks but they're often blocked.  Cars wiz around honking at people. 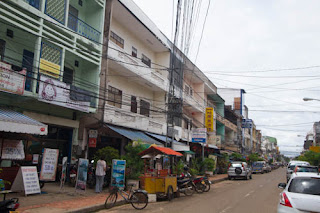 There are lots of vendors selling stuff in the streets.  We bought some of these round things.  She charged me the equivalent of $1 for 6 of them.  They were delicious.  I'm not really sure what they were.  They were sweet (but not overly so) and had what tasted like custard and sweet corn on the inside.  They were pipping hot and sizzlling on the round black plate you see in the photo. 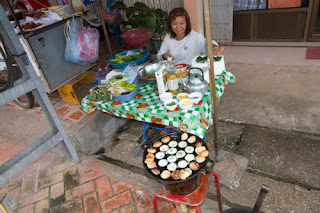 At 5pm a tuktuk driver showed up at our hotel to pick us up in a larger version of the above pictured tuktuk.  It was open in the back and we didn't exactly feel safe sitting in the back. 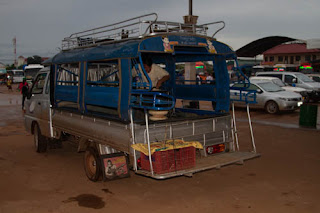 The ride to the bus station took about 40 minutes and was a lot longer than I had imaged.  I was told the station was very close by but this was a different station.  It would turn out that this 40 minute ride was the least of our worries and a prelude to what was to come.
at 05:11