The bus wound down through the mountain range the scene changed from cloudy mountains to fields dotted with small houses then villages. 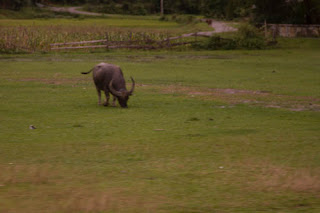 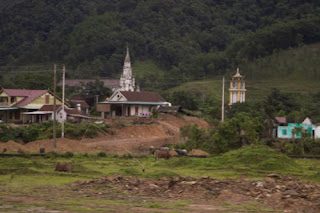 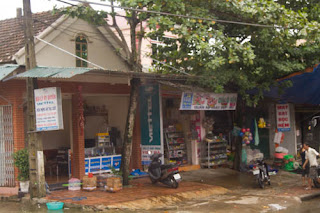 We stopped at another restaurant for lunch.  Here we stayed for about an hour.  I wasn't hungry.  Antonia wanted to charge her Nintendo DS.  I walked around and took a few photos keeping her within eye-shot.

This kid who must have been about 17 or 18 approached me and said "Hallow!  Where you from?" and offered me his hand.  I smiled and shook his hand but instead of letting go, he tightened his grip and asked me where I was from again.  I answered "France", and again he asked the same question, this repeated several times, it was no longer funny.  Then he held up my hand and said "Give me money!" with a big smile on his face.  I could see his two front teeth were black as if painted with a marker.  Then I noticed a friend of his seemed to be lurking around.  This is crazy I thought.  It's broad daylight.  I'm standing in front of shops with people all around.  This kid can't be serious.  I tried to wriggle the guy free but his grip was pretty tight.  Then I just turned around and pulled away from him very quickly and broke free.  He followed me as I made a bee-line back to Antonia.  He mulled around for a few minutes, then he boarded one of the other buses but seemed to be told to get lost.  He then came back towards me and tried to insert himself in between Antonia and myself and went to take her hand in the same way saying "Hallow!".  But before he could touch her, I started screaming at him.  The whole restaurant got kind of quiet and started staring at us.  Again he tried to approach and demanded money!  Again, I told him to go away quite sternly, not that I'm sure he understood exactly what I said but it seemed to have the desired effect.  Antonia, a bit frazzled by this, asked to go back on the bus which we did.  Whether he was just joking around or not, I didn't care.  I think if I hadn't been carrying the camera I might have physically pushed the guy when he got so close to Antonia.  I was quite glad it didn't come to that.  I must say that this is one town I would not care to visit again.  It wasn't that pretty, just one of those towns with lots of shops along the main road in the middle of nowhere.

As we drove out of this town, I spotted these two having a go at one another.  It wasn't clear to me whether they were just having fun or if they were having it out.  I must say it looked a bit serious.  I didn't see the outcome as we were driving by. 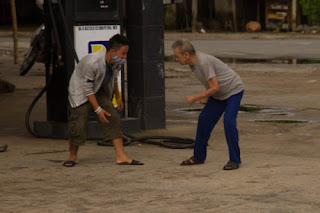 We continued on for what seemed like 3 or 4 hours.  It was about 5pm now.  I figured we must be getting close to Hanoi.  We'd been on the bus all night and all day now.  The bus was originally scheduled to arrive at 3pm but because of the delay, they upped that to 5pm and I was expecting now that we'd arrive at about 7pm.  Nothing could be father from reality.

Our friend Thanh explained to us that we were running late and that we'd get there this evening.  We sat back and enjoyed the ride.

A little while later, we stopped along the side of the road and some officers in green uniforms approached us.  I think they must have been customs officers.  They opened the luggage holds and there was some discussion.  Thanh was called outside.  After about 15 minutes, we departed.

About a half hour later, both Antonia and I needed to use the toilet.  I went looking for Thanh but to my surprise, she wasn't on the bus!  I guess she left with the customs people.  I have no explanation.  I could not get any explanation from the bus people.  They spoke no english nor were very interested in trying to answer my questions.  I did, however, get across the point that we needed a toilet (fortunately this is a common word between Vietnamese and English!)  After a little while, they pulled over to the side of the road and most of the bus got off and started peeing on the side of the road.  Meanwhile, the bus crew started looking at something behind and underneath the bus.  It was here that I realized something wasn't quite right with the bus.

Eventually tools came out and parts were removed.  I later learned that it had something to do with the clutch.  They started trying to modify things to get it working again.  After a bit, we climbed on the bus, he threw it into gear and we rolled off... for about 5 meters and he pulled over again.

Now the sun was setting.  These guys were frantic on their mobile phones.  They seemed to be discussing a part with a ball joint on one end and a push rod on the other end.  Eventually they got out a chisel and started to modify it.  After several tries it was in the bus and we set off.  Whew, I thought, well, ,we'll be in Hanoi soon and they can fix it.

Well, about a half hour later, the sun had definitely set, they pulled into what I thought might be another restaurant but Antonia spotted that it was actually more like a garage (with some food).  There were these cement things you could drive a car up on and get under it.  After some discussion, the driver got back in the bus and we did a U turn and started heading back the way we came.  Now this couldn't be good I was thinking.

Well, a good 45min to an hour later we came to a sort of industrial city.  We drove around a bit and pulled into a dark ally-way and then drove into what we thought might be a bus station but what turned out to be a bus repair depot.  There were many buses around in various states of decay and someone welding something on one side of the yard.  He backed the bus into a somewhat covered area on the other side of the gray courtyard. 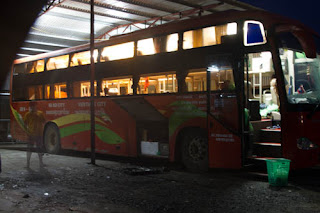 Everyone got off the bus.  People started off in the direction of the dark alley.  One of the passengers motioned to me "food" by putting his hand towards his mouth.  Antonia and I started talking to the Japanese guy named Tako and decided to go with them.  Antonia went back on the bus and retrieved my laptop and her bag, I didn't feel save leaving these things around and it turned out to be an excellent idea.

By the time we had laptop, camera, and Antonia's backpack in hand, the other folks had disappeared into the darkness.  We set out to try and find them.  We wandered back down the dark alley and managed to find the main street.  There was precious little open.  There was quite a lot of traffic though.  It was not easy crossing the street.  We wandered up and down the street in both directions several hundred meters to the points where we didn't feel comfortable getting so far from the bus.  We had no idea how long it might take to fix but I figured we were ok for about an hour.

After a long while and walking up 3 separate streets, we finally found where there were some little "restaurants" on the side of the road literally in a hole in a wall.  We sized up a couple of them before settling on one run by 3 women who were making some sort of soup which I think is called phở.  It was being served with noodles that actually looked more like pancakes than noodles.  Thanh at lunch had tough me the word for Chicken which is "gà".  I asked if it was gà and they nodded no, it wasn't, but it sure looked like chicken.  It turned out to be duck!  We ordered two bowls of the stuff.  It was pretty good but it had a LOT of coriander in it which is not my favorite.  Tako couldn't get past the coriander and didn't finish his, Antonia and I ate our fill.  Tako took some photos of this but unfortunately I didn't get his contact details, so unless he emails me, I can't show you what we ate!

We decided it was time to head back to the bus.  After another longish walk through dark streets and a very dark alley-way we managed to find our way back to the bus.  I knew something was serious when I saw the bus jacked up and the engine was sitting on the ground. 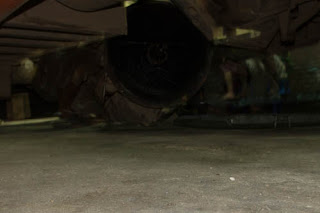 Technically this is the transmission.  They were replacing the clutch plate.  They spent quite a while under the bus and often there were three of them under there hurling loud remarks at one another.  They had an assortment of clutch plates on hand which they seemed to be trying to find a proper fit.  I took this opportunity to explain to Antonia how the clutch peddle in a car works by separating this spinning plate from the spinning motor so the wheels are temporarily disconnected from the motor.  She seems to have understood my explanation.  I don't think there's too many 10 year old girls (let alone 10 year olds in general!) who understand this, I know I sure didn't understand this until long after I knew how to drive a stick-shift car! 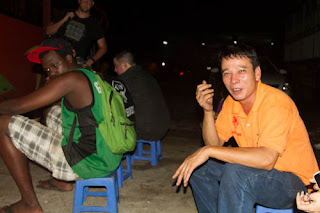 Meanwhile, we sat around.  This guy offered me a cigarette, clearly he had chilled out enough to decide to be friendly towards me!  Politely I declined.  They were also drinking beer which I did gladly accept.  The Vietnamese drink beer over ice.  It wasn't bad!  And in the heat, even at night it was muggy and hot, it was good!

We sat around for what seemed like an eternity.  Antonia was falling asleep on my knee.  It was about 10pm, I had no idea how far we were from Hanoi.  Little did we know what lie ahead...