It was raining, pretty hard at times.  The place is very muddy, not paved.  We were dropped near the bus.  I had hoped to be able to pull my toiletries bag out before putting them in the hold but this guy in an orange shirt grabbed my bag and put it in the hold.  I tried to tell him I wanted something from it first but he curtly waved me off and pointed me towards the bus holding my hiking boots which I had wanted to also put in the hold but failed to make him understand that.

Antonia and I tried to board the bus.  I knew I had to take off my shoes but someone else ushered me off the bus when I saw it was still empty.  He took us briskly to the waiting area in the station. 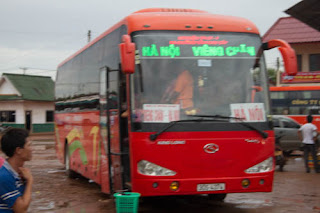 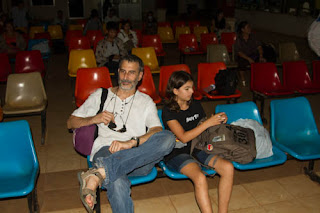 About an hour later, we were allowed on the bus.  It's not quite like a bus I've ever been on before.  It has these sort of recliner chairs where your feet stick straight out.  There are two levels and 3 rows (with 2 aisles).  A guy in an orange shirt directed us to our chairs.  He put all the foreigners in the way back, we got this neat little cubby right next to the engine.  It actually wan't too bad except for the noise and cockroaches (or whatever they were).  Pictured is Charlie and Antonia playing cards. 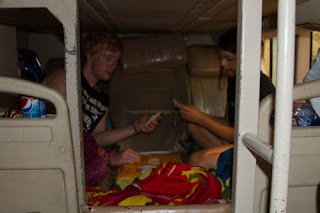 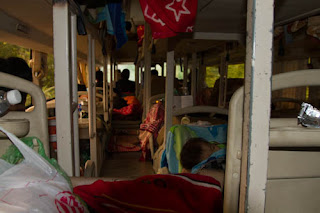 There were 5 other english speakers on board (well, one was Japanese named Takeo from Okinawa).

Night time hit as we headed north through Lao.  I tried to find out if we were going to stop somewhere for dinner.  It was absolutely impossible to communicate with these folks.  Finally we stopped for petrol where we used the toilet.  All the faucets in the sinks were wired so they wouldn't turn on.  A little while later we stopped at a road side restaurant.

We sat down with the other foreigners and waited to get served.  Eventually, someone came along but spoke no english.  One of us pointed at what they had at the next table that looked like chicken with a sauce over rice and some veggies, it looked quite edible.  Someone managed to tell us it was chicken, so we ordered one each.  Eventually 2 orders showed up but it did not look like what was at the next table.  It was plain rice, no sauce and par-boiled (mostly raw) chicken on top.  Antonia and I had a couple bites of the rice and that was it.  It was more or less inedible.  It was almost like a joke they played on foreigners.

We boarded the bus and settled down for the night.  At about 1am we arrived at the border and the bus parked for the night.  The road up to this point was relatively good.  Not great but fairly straight with a modicum of bumps.

At 6am we were roused as we headed for the Lao passport exit control.  They sent us off the bus up to this building which I unfortunately don't have a photo of.  Luckily I took my umbrella.  It didn't take too long, maybe about 10 minutes for them to stamp our passports and we headed back to the bus.

However, at the bus, the guy in the orange shirt directed us to the Vietnam passport control and sternly motioned me away to walk to some building.  We walked up to a little guards house which was in site of the bus and the guard checked our passport and motioned us to walk onwards towards some other little house which we supposed had to be the Vietnam passport control but little did we realize what was going on.  At this point, we were now out of site of the Lao passport office and the bus and separated from that area by guard post who almost certainly wouldn't let us go back.  We found a person who motioned us to go on, into the nothingness. 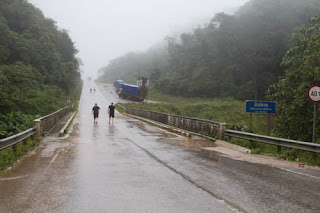 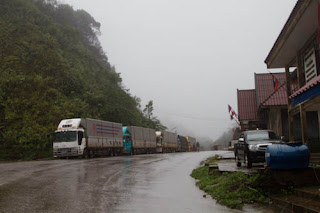 Over hill over dale through mud and rain.  And meanwhile, other buses were passing us.  It was now clear.  These guys made the foreigners walk through this crap while the locals who knew better got to ride the bus.  This was really not a nice thing to do to a kid.  She put up with it pretty well though. 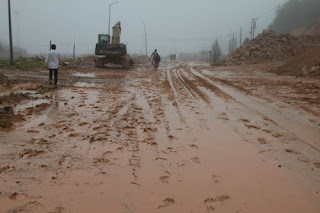 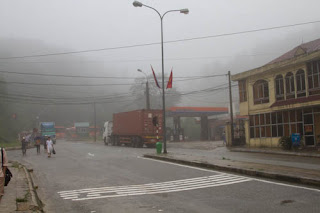 Finally after about a 2km walk we arrived at the Vietnam boarder crossing just minutes before our bus showed up and the guy in the orange shirt handed over a bag of passports to the officer. 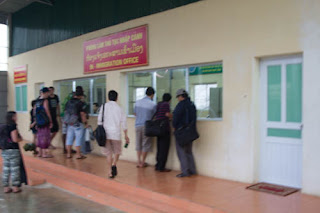 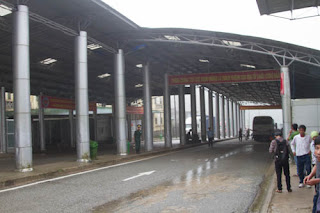 Antonia's feet were pretty messy.  I fared a bit better by trying to find a path around the deepest of the mud but in doing so, I narrowly escape impaling myself on some rusty wire! 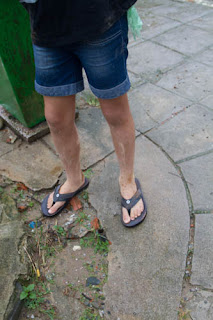 When we were waiting for our passports to come back, I discovered that there was a woman on the bus named Thanh who did speak passable english.  I asked her to ask the driver why we had to walk.  The driver replied (to her) that we just didn't understand.  This was pure bullshit.  He clearly did not want us back on the bus and made us walk.  These people were clearly not being kind to the foreigners.  I definitely got the feeling that these folks did not appreciate our business and that perhaps we were taking up space that a local might otherwise have occupied.

At this point, all the bags were unloaded from the bus, in the rain.  My pack and bags were dumped in the mod.  I managed to rescue my pack from the worst of it, the bags got a bit wet.  We then walked them through customs (the awning you see above with the bus).

Here, we waited until the customs people x-rayed some random selection of bags.  Some other bags remained on the bus.  The custom's officer went right up to them and sliced them open with a knife!  Wow, I'm so glad they dumped my bags in the mud now, it was an odd sort of favor these folks did us!

Thanh came up to us and explained to us that because of the rain, part of the roadway had washed out and we would be having lunch at the cafe across from the customs station.  Here is a photo of the cafe.  Thanh is there wearing green and white. 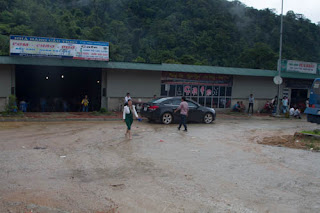 Thanh helped us order and I must say this time the food was excellent.  I had fish over rice while Antonia had a sort of noodle soup.  I also had my first Vietnamese coffee which was very strong indeed.

We stayed at this cafe for a couple hours.  Here are a couple photos of our drivers: 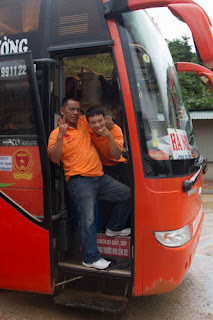 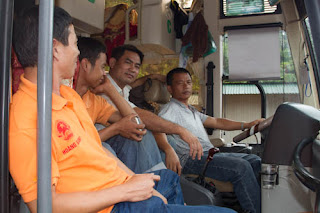 After this, the drivers seemed to loosen up (a little bit).  We set off from the customs place over the mountain pass.  The views were pretty spectacular: 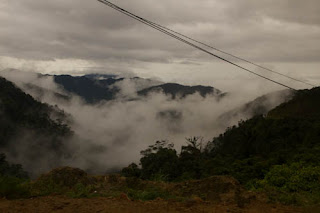 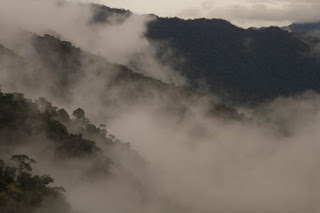 We very quickly however came to a traffic jam.  This is where the road had been washed out by mud slide. 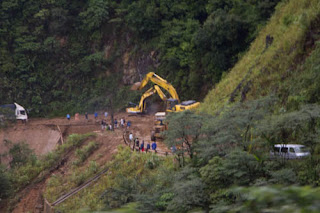 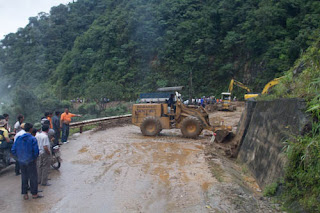 Here we waited for what seemed like an hour or two while they used heavy machinery to remove mud from the road.  Finally we were allowed to pass and I can tell you as the bus drove through this area, I was definitely a little nervous.  At one point, the bus seemed to get caught in the mud.  As we passed this area, you could look down a long way and it was very muddy.  I wouldn't have wanted to be on this road when this slide happened.

We finally were driving down a very windy road through the mountains.  It wasn't a bad road but people kept passing us and honking their horns incessantly.  But nothing would prepare us for what happened next.