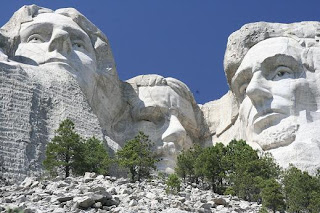 Finally, the long-awaited trip to Mount Rushmore!  We had a great time, the National Park Service has done an excellent job on the site (except for the privatised parking scenario outside).  It was a good job we arrived in the morning because the heads of the presidents were in full sunlight, which is better for photography.  We stayed for quite a while, because Antonia had to finish her Junior Ranger book.  She now has badges from at least 8 parks and a fancy Junior Ranger jacket to put them on. I passed the time with the list of States in the park newspaper, seeing how many each of us has been to.  It turns out Mike has been to all but 8 states, whereas Antonia and I are only about half-way through. 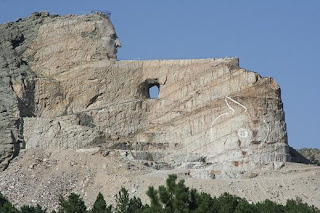 Next we went to the Crazy Horse Memorial, which is part of a far bigger mountain carving project than Rushmore, but not as far advanced.  Still, one guy told us although it has taken so long to get this far, with the new technology available, it might be done in 50 years.  The memorial is run and carved under the management of the Ziolkowski family, the wife and descendants of the original sculpture who was invited by Chief Standing Bear to carve Crazy Horse.  Since they believe in 'free enterprise' and building it entirely from donations by interested individuals, so it's a much more commercialised and expensive experience than Rushmore.  I can't honestly say I approve, and since the plan is to create a big campus for study and research on the culture and history of North American Indians, I wonder who is going to run that, how, and when and how the transfer is going to happen.  It all seems like a very important project to fund by selling overpriced junk to the passing trade from Mount Rushmore.  The carving itself is extremely impressive though, and it seems like it may go to completion, unlike Rushmore.
at 18:59