There's so much to do in the Black Hills area that this is the first hike we went on just for the sake of hiking.  We did about 10 km but to get to the trailhead we had to drive along this strange road that was constructed purely for fun.  It has pigtail bridges that make you drive around over the road you just came on for no good reason, tunnels that were created specially to frame distant Mount Rushmore and places where the road winds through the trees in two separate narrow lanes of tarmac. 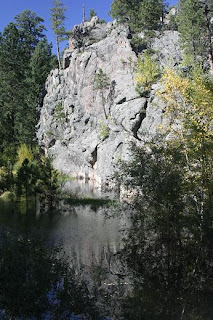 Antonia found a rattlesnake in the car park.  It's always Antonia who finds the interesting stuff around here.  This is just like the rattlesnake they showed us at the snake show at Reptile Gardens the other day and that one was pretty aggressive acting.  That's why Mike left this one alone, and didn't try to steal the litter out from under its nose. 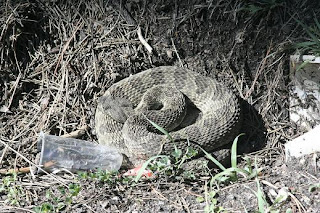