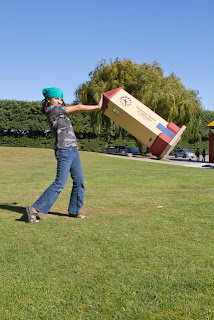 We aren't doing a lot of attractions on this trip, but we made an exception for Puzzling World in Wanaka.  It's a very nice place to spend an afternoon. It has an outdoor maze that really is fun and challenging, but I'm not going to give away any secrets here.  It has illusion rooms of which the most fun was one with a hugely sloping floor in which everything had been arranged so it somehow gave the illusion of being horizontal or sloping uphill when the opposite is the case.  There is a sliding seat on which people look as though they're sliding uphill, and a little running water arrangement that looks as if it is running uphill.  When your brain is falsely convinced of where horizontal is, it no longer knows how to position your body and its extremely unbalancing and disorientating.  There is also a little cafe with lots of puzzles you can work on for as long as you want.

We're expecting wetter weather for the next few days and have decided to take some time off touring to work/study.
at 05:16