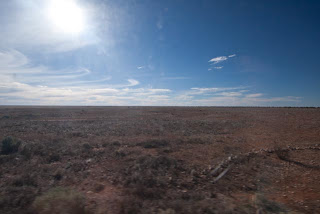 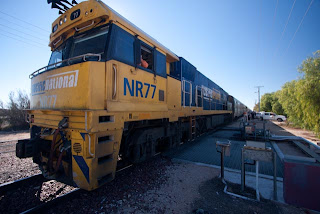 This was our second 2-day train trip, this time on the India-Pacific from Adelaide to Perth.

The first photo is of the Nularbor Plain.  It's dry but not total sand as I was expecting.  It's got mostly low scrubby vegetation and the occasional tree.  We also saw the occasional camel wandering around, usually under a tree.

We stopped for a few hours at Kalgoolie.  This is a town just on the western edge of the Nularbor Plain.  It's principally a gold mining town but they mine some other materials as well.  Though there's virtually nothing around for miles (perhaps hundreds of miles!) the town is thriving.

We stopped at Kalgoolie at about 8pm.  I got off the train and went on one of their tours while they refueled the train.

I wouldn't really recommend the tour.  Principally they showed us the hotels around the town.  The driver also drove us by the two remaining brothels in town which function illegally but are tolerated. 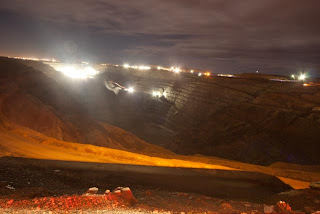 The highlight of the tour took us to the "Super-Pit" which is an open pit gold mind.  The photo was taken at night at about 90 second exposure.  My photo was the only thing people could see of the deep black expanse in front of us.  Several people crowded around to look at this photo.  (Many of them had been wondering what the heck I was doing).

The lights you see are the machines working.  They work the mine 24x7 non-stop.  The women who drove the tour bus used to work in the mine driving one of the huge dump trucks. She told us that mining jobs not only pay well, they're not hard work like they used to be.  Most mining now is done by automation and large machines.  Women make up a significant number of the work force and they're the ones running the heavy machinery.  She told us they prefer to give these jobs to women because they are apparently better drivers.

So what about the dangerous underground work in tunnels and such?  Well, apparently this sort of work these days is all done by remote control.  They have remote drilling machines controlled from thousands of miles away.
at 10:23