We found a place to stay in Singapore that's only 99 Singapore dollars a night!  Unfortunately, it's way out of town on the eastern edge of the island so we didn't know what to expect. After a half hour taxi ride we arrived at a waterworld style theme park, with a shopping mall/food court and hostel accommodation attached.  The taxi driver told us they call this the trade union conference centre, because the trade unions have special prices to come here. Basically, we are not in the tourist zone...  not the foreign tourist zone anyway. The place we're staying in (Costa Sands Resort at Downtown East) is mainly used by Singaporeans celebrating birthdays, graduations or whatever...  it's kind of a party hostel in that way, but the noise doesn't go on too late.  Based on this, I didn't have great expectations for the swimming pool, but boy, was I wrong.  It is fifty metres long, sparkling clear, warm and not too crowded.
Wow!  Antonia swam a full kilometre in this pool (with rests) so she gets bragging rights! Mike is not feeling well, and probably has that cold she had earlier, so he didn't get to enjoy the pool at first, but neither did he bear the full brunt of the downside of Downtown East, namely the food.  There are lots of choices here and they are all bad.  No matter which country you live in, imagine an out-of-town theme park, then imagine what kind of food they sell there, and you will get the idea.  This is where you can stuff your kids faces on the cheap at their birthday party, or if you have any sense, you bring your own and barbecue it in our resort.

On our second day, we rode the train system into the centre of Singapore, armed only with a map of medical services for international visitors. Unfortunately, the only one we wanted was a pharmacy to buy paracetamol for Mike, but this we could not find. We set off for Little India anyway, through street markets selling cooking implements, acupuncture and wild and wonderful ingredients, taking in a couple of temples on the way. Little India is full of brightly painted shophouses, making it look a bit like an English seaside town. They sell food, clothes, jewellery and sometimes ayurvedic medicine, but none of them is a pharmacy.  When we arrived I immediately identified the place I wanted to have lunch - a Jain vegetarian place called Big Bites - at least Mike admitted it was the best masala dosa he ever had.  I am sure masala dosa cures all ills!  The only downside of this restaurant is that by the time we had finished our meal, I wasn't hungry enough to buy Indian sweets from the counter downstairs even though they looked like the best I have ever seen.  And that is the trouble with Singapore - it seems the main things to do here are shop and eat.  The first is out-of-bounds for long-term travellers, and there's only so much of the second you can squeeze into a couple of days!  You would really have to live here... 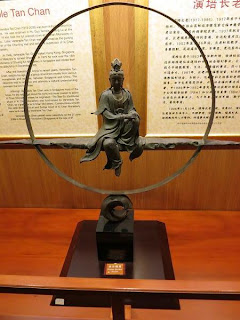 In Chinatown, we found something else to do: look at the shrine containing one of the Buddha's teeth.  It's a really beautiful, amazing place, where they've got the tooth well wrapped up in an elaborate setting.  If you go through the hall of the hundred (or is it thousand?) Buddhas, up to the fourth (or is it third?) floor into the room of eight (or is it twelve?) guardians, you can approach a glass window containing a large ornamented gold reliquary.  Somewhere in there, several metres from where you are standing, there is, allegedly, a human tooth.  You can see a close up on an LCD screen in the room. Actually, I really like this place.  If I had to choose a religion, it would be Buddhism. When we went back downstairs, people were chanting the hundred names of Buddha in an intoxicating kind of way, so we walked around the gallery above them, looking at the exhibition of famous monks and the statuettes like this one which made my day.

On our last day, we played we really lived here and it was our day off work: we rented bicycles and went for a longish ride along the various 'park connectors': bike paths that run a long the drainage canal systems, under the overhead MRT track and sometimes along roads.  We bought foreign food at a fast food chain selling French-style baguette sandwiches.  I have to hand it to the Singaporeans, their baguettes are not quite all there, but they are better than anything you could get in the UK or the US.  Expensive though...  We picnicked by Bedok reservoir, then cycled back and tried to find fruit in the ghastly theme park shopping mall.  In the end we had to make do with a can of longans.  Then we went swimming all afternoon.

The cabby who took us to Woodlands station to catch the train to Malaysia next day told us that Singapore is busy reclaiming land from the sea, so that the island is growing.  He said they had bought rocks and landfill from Malaysia then from Indonesia but both countries were now refusing to sell, lest Singapore encroach on their borders.  Perhaps he was stringing us a line.  It is true that the train line from central Singapore to Malaysia is gone now, and that may or may not be because the Singapore government bought up the land to build apartment blocks on!!
at 05:05