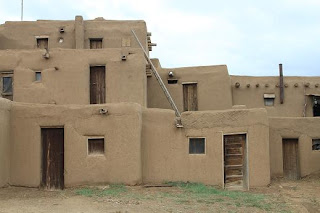 You can visit medieval villages in the United States and this one is even listed as a World Heritage site.  It's called Taos Pueblo, the home of the Red Willow tribe. The village has two multi-story blocks of homes separated by a wide public space with the river running through it.  The structure of the tallest blocks is at least a thousand years old, though, being adobe, it's been repaired on an ongoing basis.  In the last four hundred years, contact with the Spaniards then the Americans brought a lot of changes.  There is an old church, now ruined, and a new church which is still over 150 years old.  Outdoor ovens called hornos are scattered around the village, and are also a Spanish borrowing, and they do look pretty familiar from Europe.  They contrast with the large wooden drying racks, the system for which dates back to pre-Spanish times. The stacked houses now have front doors, often painted in bright colours, but originally, access was through the roof.  It reminds me very much of Catal Hayuk in that respect, and a few other places.  It's an interesting reminder that there isn't a single village model. The tribe keep their many aspects of their traditional spiritual and social life separate from outsiders, so while the churches are prominent, it isn't possible to see the kivas.  These are underground rooms for religious and administrative meetings. 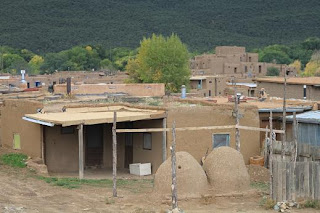 A relatively small number of people live in Taos Pueblo now, probably partly because of the decision to keep modern utilities out.  There are more visitors here than Indians and a whole load of systems for keeping us under some semblance of control.  Meanwhile the tribe has quite a lot of other land.  Most people live in modern houses closer to Taos, and there is a very large wilderness area where only tribal members are allowed.  The adobe houses in the pueblo can be lit by gas lamps and heated with wood burning open hearths.  These facilities were quite important to us on our visit because it was dark, gloomy, and so cold it felt like it might snow.  There are actually quite a lot of houses that are open to the public, selling crafts or food.  We weren't in the market for crafts but we did buy some blueberry pie, and some of the famous fried bread.  It is famous, because the craft shops are full of signs saying things like 'No fried bread in here!", "Keep your icky fried bread papers to yourself".  With the fried bread lady's reputation preceding her like that, how could we resist when we eventually found her shop!  I had never imagined that ordinary bread dough would expand quite the way this did when deep fried in oil. Then we covered it in sugar powder and cinnamon, and got all icky.  Then we turned out noses up at the local dogs who suddenly decided we were interesting and went to visit the church.  Haha, we didn't touch anything though. 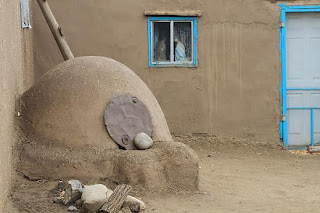