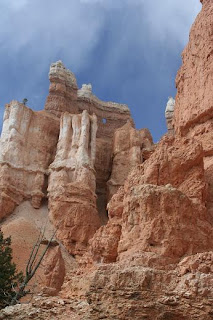 Unbelievably, Bryce Canyon is even higher up than the Grand Canyon.  It was going to get very cold on Monday night and snow on Tuesday night.  I forced poor Mike to check into a campsite where we could have an electric hookup and run our little electric heater.  To make matters worse, we got use of tbe swimming pool and hot tub at the hotel next door thrown in. Poor, poor Mike... I spent a very pleasant night being clean and warm plus I was able to do the breakfast washing up indoors and using hot water!!! 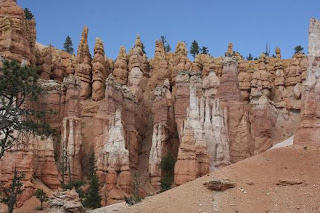 But we were not there for these creature comforts.  Bryce canyon is not a canyon at all, but an eroded plateau full of these things called hoodoos.  We went to a geology talk where the lady explained how to make them.  Start with some really impure, crumbly rock, subject it to stresses from two separate faults so that it cracks in a checkerboard pattern, then raise it to just the right altitude to get 200 freeze-thaw cycles per year.  That means we had no chance of sleeping at temperatures above 0C in October. 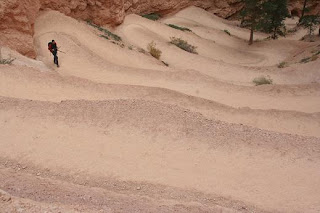 We spent the day looking at the hoodoos from the top and the bottom.  We left in the afternoon with just enough time to reach Zion national park before dark.
at 17:48