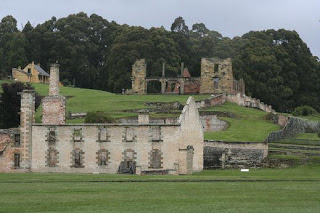 We woke up to a solid wall of water.  The rain was obscuring the island opposite and the high tide brought the sea to within a metre and a half of our house.  It's kind of spooky and fascinating at the same time.  Julia and I decided to go to Port Arthur in the expectation that it wouldn't matter too much if it rained.  Port Arthur, right at the southern tip of Tasmania, is where the most rebellious of the original Australian convicts got sent for bad behaviour.  It looks like an idyllic English country village surrounding a ruined church and abbey.  In reality, life here was a nightmare.  For one thing, if this is an example of how cold it can be in midsummer, what must winter be like!  If you misbehaved at Port Arthur, at first they used to flog you, but then they decided this was barbaric.  Instead, they put you in a maximum security sensory deprivation prison with a hood over your head and a number instead of a name.  You were under constant surveillance, but not allowed to make contact with any other human being, visually or verbally.  You couldn't see outside, or read anything except the Bible.  If that didn't work, you got the dark cell for 72 hours where you couldn't see anything.  To deal with the results of this process, they built a lunatic asylum next to the prison.  They also had a paupers workhouse and kitchen for prisoners who had been freed, but were too institutionalised to survive in the real world.  What a system!

When we got back, the weather had improved a bit and Mike and Antonia were out in the channel just in front of our house, wearing borrowed wellington boots and collecting oysters.  It looks like oysters are going to be the one thing that's cheaper in Australia than elsewhere.
at 21:27