I didn't even want to hear about leaving the ship, but the Australian immigration are aboard inspecting us all.  We respond by exchanging wild rumours about what they do to people who accidentally forget to declare any organic material they may have about their persons.  I went to have my hair cut and now look like a human being who hasn't been dragged through the backwoods for six months. It's one of the best and least expensive haircuts I've ever had, by a girl who is South African but has been living in London in the same area I lived as a student.  The next day the ship's boat-building contest was held in fairly rough seas (i.e. the ship's swimming pool which was showing a tendency to slosh over), and we ate a large Thanksgiving dinner. 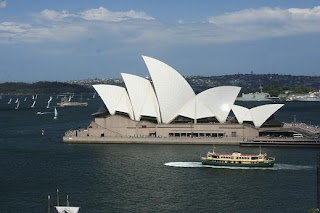 Day 1 in Sydney
In Sydney, it is raining hard in Sydney but we somehow managed to see a lot of the major sights on the first day.  We are staying in the earliest settlement area called the Rocks, in a nice old house above the harbour.  It's about 15 minutes walk to the Opera House and the Botanic Gardens.  When we went to wander around, the first thing we found was a tea shop offering the most outrageously huge lemon meringue pies I've ever seen, and the second thing was a couple of interesting books.  So, Sydney made an excellent first impression despite costing too much and having bad weather.  How much too much it costs and which currency it costs least in is still a matter of debate.  In the evening, we met up with Julia who is over from Grenoble to hang out with us and visit family, though we won't really see her much for a day because she's off on a dolphin tour tomorrow. 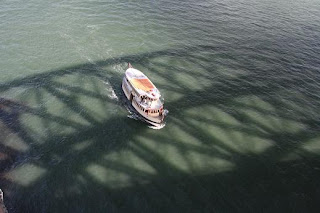 Day 2 in Sydney
It's still raining so we bought ourselves tickets for the aquarium and went there.  The aquarium and a lot of museums and tourist attractions are around Darling Harbour which is loverly.  The first thing we saw was the duck-billed platypus tank which was very exciting.  The platypus was very active when we were there and very cute, but smaller than I expected.  The next exciting thing was the dugongs, of which there are two.  They eat lettuce constantly and are served by an all-day salad bar.  I'm glad I'm not a dugong, but I suppose they like it.  They are both quite young animals and they keep them separate quite a bit, because when they put them together they play so rough they hurt each other.  The best thing in the aquarium is the giant reef tank with classical music accompaniment..

When we emerged it was unexpectedly sunny so we went for dessert in a harbourside cafe.  Mike and I have different approaches to dealing with Sydney's outrageous expense.  Mine is to lunch on dessert and a glass of wine.  Mike's is to refuse to order anything at all, then help himself off our plates!  After 'lunch' we went back to the hotel to change into warm dry weather clothes and walked over Harbour Bridge which is just up the stairs from our hotel, then down through the Rocks weekend market.  The harbour is astonishingly busy and I couldn't help wondering how all the boats avoid bumping into each other. 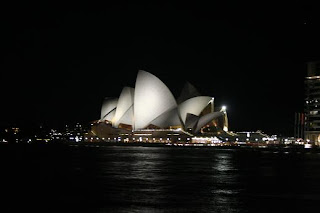 The highlight of our visit was eating calamari and softshell crab on the harbourside in the evening.  Antonia (obviously it was Antonia) suddenly realised that the birds flying overhead were actually an exodus of large bats from the botanic gardens next door.  So that is Sydney: if you are stinking rich, you can sit by the water every night, sipping wine and eating nice food, watching everyone stroll along to the opera house in their pretty dresses, and the hoards of bats flying overhead.  It's a pretty nice life if you can get it.
at 22:56