We got up very early to catch the train to Melbourne.  The best thing in Australia (and the US) is the ability to check your luggage.  The most strikingly different thing is the ambiance.  It is a lot more fun here.  Our train trip started with someone on the intercom reminding us of all the things that would get us thrown off the train (e.g. smoking in the toilets).  By the time they had finished, I knew three or four things not to do that I had never thought of before, but just in case I was short of inspiration, the train staff were cheerfully full of entertaining anecdotes of things people had done on their various watches.  It was a long journey, and by the time we were two thirds of the way through, the denizens of Car F, in particular, were getting bored.  They had already set off the smoke alarm in their toilet, and had taken to pulling the carriage handbrake as we left the station to see what would happen.  They were probably putting their feet on the chairs too, for which there is a fine. 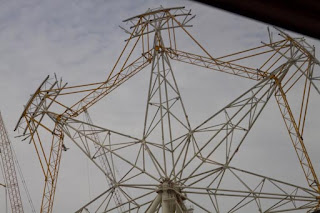 Unfortunately, or perhaps fortunately, the train trip was soon to end. A freight train had derailed the night before somewhere ahead and we couldn't get past.  We all got off at some little station somewhere, collected our luggage and piled into coaches.  The coach driver told us a couple more amusing anecdotes about people doing stuff they shouldn't then decided to put the procedure on automatic so he could concentrate on driving.  He played us a video called the Birdsville Track which is an ancient documentary about a guy who did the mail run across the Australian outback. It is full to the brim of things one shouldn't do.  By the time it was done, Mike was looking at Julia's maps, to see if the Birdsville Track still exists and whether he can do it and get into some entertaining form of trouble on the way.

By the time we got to Melbourne at 8pm, our main consideration was to find food, so we tried asking the locals until we found a couple who are practically my brother's next door neighbours (they live within 10 miles of him).  They knew where there was a whole street of restaurants with outdoor seating.  These restaurants compete with each other fiercely so we got four meals and four drinks for the price of three meals, and considered the place blissfully cheaper than Sydney. 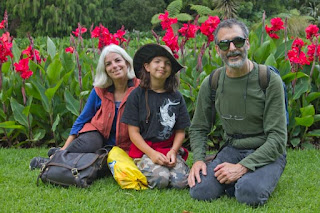 Even though Melbourne has paid tourist information people hanging out in the streets, we ran into the same couple as last night, who told us that the tourist hop-on-hop-off bus would take us all over the town centre for nothing, and so will the circular tram.  We got to see over the whole city in the morning and got off at the Royal Botanical Gardens for the afternoon.  Melbourne is lovely, very much like a European city (continental Europe).

We made it to the docks by about 5.30 to catch our ferry to Tasmania and found it very civilized.  They checked our luggage, made sure we weren't trying to import fruit or fish across the Tasmanian sea and let us into our very nice cabins - not quite as fancy as on the Zaandam, but still pleasant.  I was surprised that we weren't given a list of things not to do again, but the safety video was pretty hilarious.  We had a nice meal, in which Mike tried to fit all he could eat for 16 AUD on to a fairly small plate and went to bed.  As we exited the bottleneck of the bay that contains Melbourne into the real sea, lightning began flashing all around us so we fell asleep to a nice familiar pitching and rolling and thought of Julia who has a tendency to think she might get seasick.
at 23:03