To reach Hawaii, we spent four days at sea, during which we got to know the ship and slipped into a routine so quickly it's seemed incredible to be going ashore.  There are about eleven kids aboard the Zaandam and a whole gang of them are about Antonia's age.  The only other girl is quite a bit younger than her, so she had a bit of a shaky start, but after a few days it went brilliantly.  I am sorry to say she abused of her bey blades and nintendo ds to gain social capital, and also dresses herself carefully in her least pretty and feminine attire before any kid's club session.  We soon learned we need not expect her to join us for dinner as she had prior engagements or was resting every single night.  I am not used to all this adult life and am wondering what the withdrawal symptoms will be like.


Hilo, Hawaii
Mike went off with his friend Geoff, so Antonia and I took a taxi to a Japanese garden on the coast.  Really, we could have walked but the taxi driver did direct us to the best fish restaurant in the neighborhood.  It's really a warehouse where the fishermen deliver fish, but they have a shop for the public and a small kitchen with a few benches outside.  We spent the day looking at flowers, crabs, washed up coconuts and banyan trees and it is all very new and interesting.

Kauna, Hawaii
Mike went off with Geoff again, and we found Kauna less interesting than Hawaii.  Today we had to tender to shore which is a lot less convenient than having a gangway.  When we got to Kauna we realised the only things to do are shop or go to the beach.  We had forgotten our beach things and didn't really want to shop, but had very little choice.  In the end we rented a sea kayak and paddled out into the harbour to see what this strange structure is.  We had fun but also got soaked and sunburned. 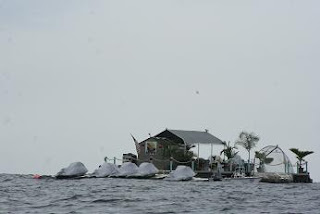 Honolulu, Hawaii
I walked to the Bishop museum on foot, which meant I passed through the whole port area, chinatown and some residential areas.  It was kind of interesting.  There are a lot of people sleeping rough in the park in Hawaii, but on the other hand, there may be worse places in the world to have to sleep rough.  The museum is really beautiful.  The main room has the old fashioned museum architecture of panelled wood galleries around a tall central area (for hanging canoes and lifesize models of whales).  The exhibits on traditional Hawaiian life and on the history and politics of Hawaii were very well put together and organised.  In the evening, we discovered that the ship can take care of all the emigration procedures for me so that was handy. 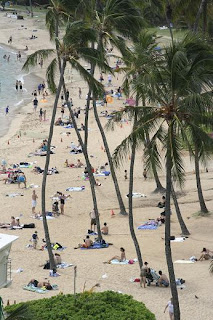 On our second day, Mike hauled us out to Haunama Bay, a state park set aside to protect a beautiful bay with coral reef.  Getting there by public transport is frankly a nuisance, but it is very pretty.  You have to pay to go into the park, and watch a compulsory video begging you not to step on the coral.  We all went snorkelling, and Antonia (of course it was Antonia) swam with a sea turtle for several minutes and saw an unidentified stripey sea snake or eel as well as the usual fish and coral. 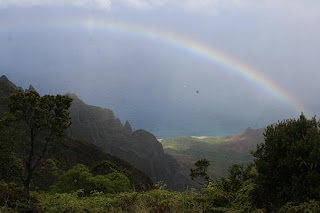 Nawiliwili, Hawaii
We rented a car - hurrah! - so I actually got to see what some of the interior of Hawaii looks like.  Really, we just drove up the center of the island taking photographs. At the end of the road on the wet side of the island, we had a beautiful rainbow at the end of the journey.  Then we returned to the dry side and ate shrimp.  This is pretty much all you have time to do on port days, when we're off the ship between 8.00am and 4.30pm - if you're very organised.  I have already decided I don't think much of cruising as a way of seeing places, though I love being at sea.
at 08:23