We spent five more days at sea, during which we crossed the equator and various people went and kissed a dead fish and turned the front deck swimming pool into something that looked like the drainage ditch from a fishmonger's slab.  Most days I teach Antonia in the morning, send her to kid's club and do my own work in the afternoon, go to the gym twice, the hot tub once, eat three square meals a day and take in any events that seem particularly appealing.  It's very relaxing and I love being at sea. 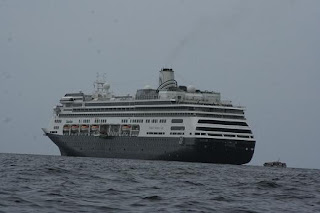 Pago Pago, American Samoa
On the other hand, I am not so enchanted with port days, so I didn't go to see American Samoa, but stayed on the ship instead.  I decided that, given the time available, what I really like is ports.  I love the shapes of the containers, warehouses, cranes and ships, and the contrast between land and water.  The port at Pago Pago is especially beautiful.  It seems like everybody else is spending their whole time on beach days.

More sea days followed.  We have crossed through numerous time zones and the International Date Line.  Despite the fact that the ship's staff put rugs marked with the name of the day in the lifts, and remind us twice when we change time, we became confused and our various computers and watches all told different times and days.  To make matters worse, the ship time was not always the same as the gps time for reasons of convenience, I suppose.  It seems like a joke to say we have lost a day, but I am not really sure if we reached Fiji on the 227th or 228th day of our trip.
at 08:29