It took us a day to sail between Fiji and New Caleonia, which I spent in bed with a cold I caught while coming back from Dravuni on the tender.  I wasn't seriously ill, but I was quite glad to have an excuse to stay in bed and do nothing.  By the evening I was quite a bit better and, Mike and I went to see The Help since everyone has been talking about it.  It's the first movie I've seen since Avatar that wasn't an out-and-out kid's film. 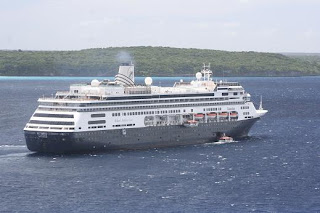 Easo, Lifou, New Caledonia
Lifou is part of France of course, and our first impression is that we need not be too ashamed (being French!).  It is clean AND pretty AND has reasonable infrastructures for such a tiny place.  We walked around for a bit, through masses of butterflies, then went snorkelling on the far side and saw what Mike says is the best coral he's ever seen in his life.  There were also fish, sea cucumbers, multi-colored giant clams, and molluscs so it was generally beautiful.

Ile des Pins, New Caledonia
The part of Ile des Pins where we landed had even more infrastructure than Lifou and it's extremely strange to see cars, gendarmerie, post boxes, rubbish bins and all those other things in the French style, especially after being away for so long.  Speaking French to the people here is just like being in France, there is a whole lot less difference that in speaking French to, say, Canadians.  Ile des Pins is even more beautiful than Lifou.  I thought the trees here were extraordinary.  I could have spent ages looking at them but everyone else went to the beach (as usual). 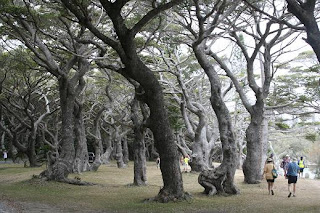 Noumea, New Caledonia
I got called up by the New Caledonian immigration authorities first thing in the morning, which was fun, then went to visit Noumea.  Noumea is New Caledonia's main city and it isn't much to look at.  We decided we had a similar experience in Reunion, which we loved, but when we eventually got around to visiting the city, we wondered why we had.  On the other hand, the people there are very friendly and helpful.  We found ourselves shepherding a group of non-French speakers from our ship to the right bus, which is pretty much the blind leading the blind, except we know how to ask the locals for help.  We spent the morning at the Tjibao cultural centre, which is both beautiful and interesting, first of all for its architecture and secondly for its exhibitions of contemporary and modern art.  It has resources we couldn't benefit from because of our schedule: cultural shows and films and a library in which it must be amazing to do research.  Antonia settled into the library to read children's books about Oceanian mythology in French, and had to be removed with a crowbar.  I was quite glad to see her reading and speaking French after so long.
at 08:36