I had to take my parents to one of my favorite places in all New Zealand - the sand dune beach on the west coast of south island, just under Farewell Spit.  All the way there, I was afraid it would rain, but fortunately, it was only cloudy. Antonia had a great time sliding down the dunes, and we had a great time exploring the sands and rocks, and watching the seal pups.


We had a bit of an exciting time getting back.  In theory, I knew that if you walk along the beach there is a path at the far end leading back to the car park past a couple of lakes.  We set off to look for it, but after a while we weren't sure if we had gone too far or not far enough.  We headed off into the bush, hoping to strike the path, then decided we weren't striking it.  My dad - whose age will not be mentioned - decided to be the advance scouting party, and started pushing through the trees to see if he could find the path.  After deciding he couldn't, he started to come back down but went a different way and ended up to one side of us on the other side of dense bushes.  Meanwhile we were waiting and waiting, then eventually started calling him. He replied a couple of times then stopped despite our encouragements.  This was unfortunate because sound was the only way we could locate him, but he, being deaf in one ear, doesn't appreciate the usefulness of sound in this respect.  Eventually, we found him and once we all got ourselves together we realised we were standing on an expanse of rock, with the path at the far end of it and the beach just visible at the end of the path. 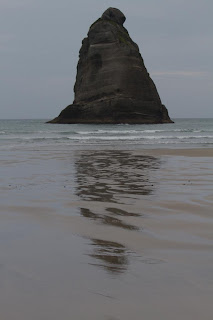 So a good time was had by all, and everyone agreed that this is a very beautiful beach.