Mike booked us a one-day sailing class/outing which was really way outside our budget but was still a lot of fun. We had both done some sailing as children, but we have forgotten most of what we knew. 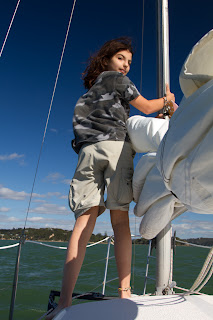 We turned up at the dock at 9.30am and found that the lady taking us out grew up in Maryland, near Mike.  She sails around with her husband and two children and they live full-time on their boat so we had a lot to talk about.  Our plan was to take out a small sail boat (not hers, a smaller one), to an island on the far side of our peninsula, picnic there and head back. In the meantime, we are supposed to learn as much about sailing as possible.  Our first difficulty was to round the peninsula with the tide against us and very little wind.  Our second difficulty, once we did get into wind, is that the shape of the land makes it very gusty and changeable.  I had the helm (well, sometimes Mike was chatting and I kind of had everything!) and I wasn't super-comfortable with the boat's sudden changes of speed and angle.  I remember from sailing on the Med. that conditions were much more even, at least when our friend used to take us out. 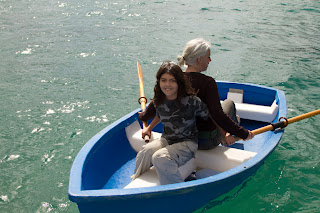 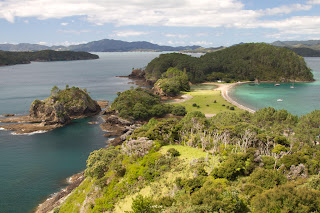 Anyway, we made it to this island and went ashore in a very light plastic row boat that's very nasty to row or get in and out of and which I christened Ocean Detritus, because it didn't have a name, and that one was suitable. After a quick stroll on the island, we started heading back and when we rounded back into the channel between our peninsula and the mainland we found that both the wind and the tide were against us.  We tacked and tacked, only to remain where we were.  So we brought the sails down and motored back.  The lady who took us out was a bit disappointed by this, but it was the only way we were getting back before 7pm.  She had a race at 5pm, Antonia and I were exhausted by now, and Mike's steering at the helm had become, let's just say 'exciting'! 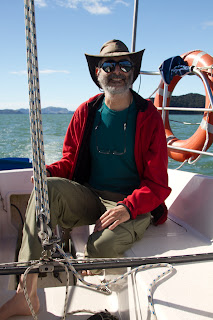