This was a big day for of firsts for Antonia.  We drove over past Kerikeri to join in our friend's recorder group for one session.  Antonia has been learning the recorder (and how to read music) but this is the first time she played in any kind of group situation.  It really says a lot for her progress that she was able to sight read music well enough and fast enough to join in and well enough to pick up the thread if she got lost.  Her biggest problem was that there is still one note that turned up often that she doesn't know, and a couple of accidentals that she's lost on also.  It was a pretty challenging experience for her, but she did well.

After this, we went over to our friends' house in Kerikeri and took their kayaks out.  This was Antonia's first time in charge of any kind of boat all by herself.  People who know her will be interested to hear that she kayaks like she skis: as fast as possible, with limited steering control! 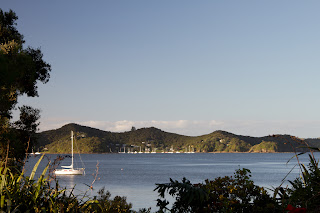 We went out for dinner to a restaurant in Kerikeri which was fabulous and enjoyed it so much that we missed the last ferry back.  With the ferry, we would have been about half an hour from home.  Without it, we had to drive south along the mainland for about 60 kms, then turn north back along our peninsula for nearly the same distance.  We had to drive through the forest on our peninsula over dirt track.  We got home about midnight, having seen a whole lot of possums and collapsed into bed.
at 00:31