We had no idea that last bit of road onto the Coromandel peninsula was going to be so narrow and winding.  After a day in which the gps already got creative about our route and took us on the shorter, slower, scenic route.  However, we made it eventually and found a cabin in a campground just outside Coromandel itself.  It was a beautiful place, quiet, surrounded by forest and with access to its own beach.  Just as well, because the next day we were going on a sort of roller-coaster ride. 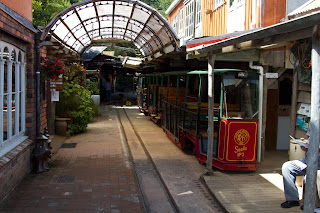 Barry Brickell is a potter from around here who started to build a railway up his land to carry clay down to his workshop.  It's rather a DIY style thing, with lots of loops, switchbacks and viaducts designed to somehow get the wagons up the track.  Then Barry ran out of money and decided to run passenger trains up his track for money.  The return ride takes about an hour, and while it's more scenic than scary, I could understand my dad's comment that he has a brave insurance company.  One of the fun things about the ride was that it features lots of art work of various kinds, as well as native plant species that they are trying to re-establish on this land.  Perhaps the most significant will be the kauri.  You would not be able to tell how impressive these trees are from the youthful version, but my parents found a mature one on a botany trail and took us to see it in the morning.  It must have been about 500 years old and quite reminiscent of the Avatar tree.
at 00:28