We spent 6 days in Adelaide last week before taking the train across.  We stayed in the YHA Youth Hostel in the center of the city there.  It's kind of like a hotel but there's a huge shared kitchen.  The staff made pancakes every morning between 9 and 10am which was fun.  Except that they didn't put baking power in the recipe so they were actually a bit gooey on the inside.  I did manage to convince them though that they need to add some baking powder to their recipe.

The first day we were there (saturday), there's this guy who shows up every saturday and does a 4 hour walking tour of Adelaide for free.  And it was truly 4 hours indeed.  He showed us pretty much all the monuments of the city.  He took us into the local aboriginal gallery which was pretty interesting. 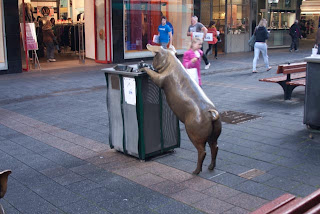 One of several sculptures of bronze pigs around the pedestrian district. 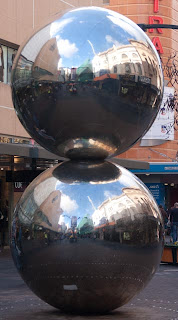 This sort of sculpture reminded me of the shiny thing we saw in Chicago (but it was much smaller and not nearly as polished). 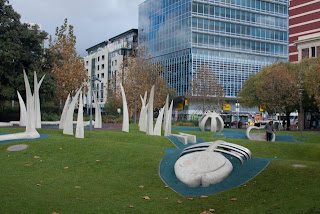 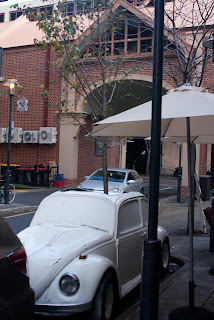 Look closely, there's a tree growing out of this VW!  Yes, this VW was converted into a pot for a tree.  I wonder how many parking tickets it gets! 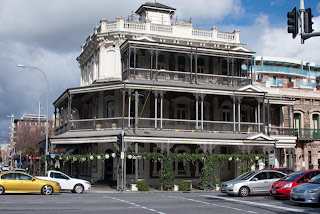 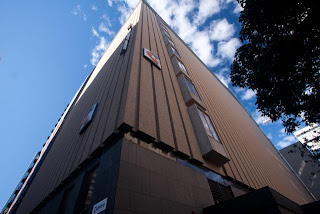 Above is the Adelaide Waymouth St Central Office, a tall windowless building.  One of my personal favorite buildings in the city.

There's a fantastic indoor market in Adelaide which unfortunately I don't have any photos of since it was both crowded and dark which would have made it really hard to get a decent photo.  But you can get virtually there you want from fine French cheeses to Moroccan spices to frech vegies, meats, seafood.  It's a covered market that dates back over 100 years.

All in all, we had a pretty decent time in and around Adelaide.  It's a city well worth a visit.  We found the people pretty nice too.
at 09:05