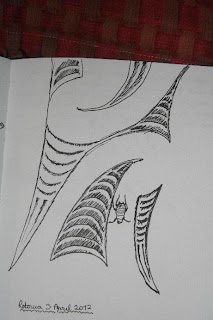 Te Puia is a centre for Maori arts, set in a geothermal area, with a gallery, various traditional Maori buildings and a nocturnal kiwi house.  I went there, sort of planning to draw and look at Maori carvings, but in the end the only one I drew was this koru design with a cicada skin resting on it on it.  It was the juxtaposition that interested me, the carving itself is a mere decoration on the post of an audio guide.  I wish it were a better drawing but it does sum up my experience of New Zealand forests: ferns and cicadas singing away.

I spent a long time sitting on top of a platform watching the geyser make its own mini weather system: blowing mists, pattering showers of water on rocks, and underneath all that, a dull thumping, like a heartbeat.  The mound deposited by the water is riddled with what look like mouse holes, but they are vents, ringed with yellow sulphur.


It's funny how sometimes our interest is not drawn principally by the things we came to see. In the cafe, on the parasol above my head there is a sparrow pattering and hopping around.  I can see its feet and tail sharply outlined on the canvas and a vaguer shadow of the rest.  A lady at the next table has remarked on how the sparrows are circling us and how she's glad they're not sharks. Then she went off into a comparison with the behaviour of sparrows in England's lake district. I looked at these ones and wondered if sparrows around the world are starting to evolve to be different.  Next thing I know two little sparrow heads are peering down over the edge of the parasol.  Another is sitting on the chair back opposite. It is fairly obese and doesn't look at all capable of the behaviour of the sparrows in Orkney, who seemed to want to become humming birds.  It's not that I didn't pay attention to the kiwi. One of the exciting things about Te Puia is the nocturnal kiwi house, which is just about the only way to realistically observe a kiwi at close quarters. You can really see how it pokes and prods with that crescent moon beak it's got, and how it looks like a pompom with legs from a whole lot of angles.


At Te Puia, you can see trainee carvers and weavers at work and some of their output, as well as a lot of excellent carvings all over the place.  I noted from one sign that a third of the curriculum on the carving course consisted of learning the iconography, which did not surprise me.  Also, the carvers here do not work under tapu.  That is interesting, because it gives them and their output a different status from the usual one.  I wondered if it was a situation that encouraged experimentation.  Sure enough, a few minutes later, I found myself in the gallery, looking at a very traditional appearing Maori ancestor carrying, instead of the usual axe of paddle, a long rifle, with the metal parts exquisitely carved in bone.  I don't know if that has anything to do with tapu but it was an interesting departure from tradition.
at 23:03