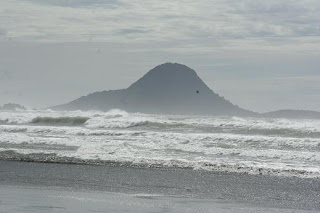 I earned this beach!  I spent all the time getting here worrying about things: that the road to Gisborne would be shut at 5.30 and that I didn't really have time to do this, that my gas meter was apparently locked on the half tank setting because it is broken and I would run out of petrol somewhere in the middle of nowhere, that Ohope Beach wouldn't be as nice as it was four years ago.  None of those things happened: Ohope Beach is wild, windy, full of clouds and spray, blue sky and waves you wouldn't touch with a bargepole.  The first thing it did is blow the lens cap off my camera.  I probably didn't notice straight away because the lens cap was tied to a little dangly thing.  When I did notice, I looked to see where the lens cap might be and saw sand, seaweed and smaller pieces of driftwood tearing down the beach away from me at mach speed.  Goodbye lens cap.

Anyway, I earned this beach because this morning I went to buy a new swimming costume.  I had already found a shop that sells swimming costumes but I needed a couple of days to steel myself for the task.  If I used up all the words in the thesaurus under 'hate' it wouldn't even begin to cover the way I feel about shopping for clothes.  But I had to, so I went down to the store and picked three items of random sizes, having no idea what size I am in New Zealand.  Turns out it made no difference, because the sizing varies with the brand of costume but I am always between two of them, though not necessarily the same two.  Then I walked all around the store to find the changing rooms which are at the other end.  You are only allowed three items at a time and you have to ring for a shop assistant to open the door each time.  I budgeted to repeat the process a couple of times.  Five times later, the only thing keeping me going was the fact that I had forced the issue by throwing my threadbare old swimming costume away in the hotel I had just checked out of.

There are two kinds of reaction to buying swimming costumes: you can either think 'I look ridiculous in this costume' and think bad thoughts about yourself.  Or you can think 'this costume looks ridiculous on me' and think bad thoughts about the people who designed it.  I chose the latter.  Eventually, I tried on the style of swimming costume that everyone in New Zealand wears but which I've never owned before and hadn't thought of tyring.  It fit and it suited me.  Thank goodness, that's another thing off my checklist.

The first thing I did when I got to Ohope is find a really cosy place to sit and have lunch and do at least one of the five hours of writing and research I have budgeted for per day, in between seeing a bits of New Zealand I haven't seen before. Course, I never saw them before because they are inaccessible - like the East Cape, where I am headed now.  I decided I could not afford 6 hours to drive round it, so I am going straight to Gisborne, then up the east coast for a day.  I remember in the UK someone made a documentary about the whole coastline.  I must watch it someday, but I think that a similar series for New Zealand would be amazing.  It seems as though every beach is different, and ecologically, they're faring better than British beaches. I walked down the beach thinking about all the things I had to write and wondering how different the western East Cape would be from the Bay of Plenty and generally feeling quite pleased, when my eye fell on a black disc propped against a piece of driftwood.  Hello lenscap!

Special note for Michael: I have decided to go on a health cure:  I ate salad for lunch, so you should be proud of me!  Well, never mind that it was Ceasar salad with bacon, eggs, anchovies, cheese and croutons. I know that if someone put a poached egg, a slice of bacon, a piece of cheese, some anchovies and a bit of fried bread on a plate next to some lettuce leaves this would somehow make a difference, though I'm still trying to figure out the details..
at 09:23