Wow, this is one cool place I've fetched up in here.  I thought I would drive as far as Raglan because it might be nice, then on to Auckland tomorrow.  I started looking for the YHA in Raglan, which finally turned out to be about 10 miles out of town, at the top of the cliff overlooking a beach.  Without any warning, it turned out, after I had paid to consist of cabins. Hmmm, I said I wasn't staying in cabins any more.  I wondered if it would be freezing.  Well it turned out to be fairly amazing.  This is my cabin: 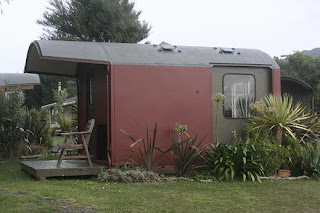 It is warm inside, but not too much - obviously a bit of greenhouse effect.  It has a heater that looks like the super inefficient heat accumulator type, but it may be good enough for the top of north island in april.  The big issue as far as I can see, is the lack of sockets.  I think we are being ecologically discouraged from using electrical appliances.  Really!!!  Yes really.  But the earth cabins have sockets, so after a little transfer, this is my new cabin: 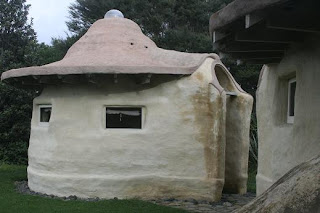 Wow, I want one of these for a studio.  I haven't slept on a futon in a foom with thick walls and small windows for over a year.  It really is the only way to build.  It's certainly the only way to build a cabin that doesn't need a heater in winter.  This cabin has sockets and no heater but I'm not too worried.  I expect it to hold its temperature. 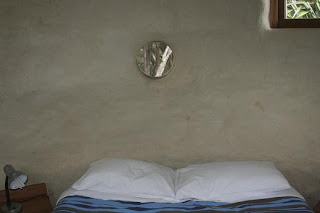 Raglan is trying to undo New Plymouth's good work by making we want to stay longer.  I could spend a few weeks here, working on that translation I'm supposed to be finishing today.  This is just the sort of place Jasper would be staying in.  I wonder if the Kiwis really like places like this?  They're certainly not used to them.
at 06:25