One of the tough things about staying in Wellington YHA to catch up with your work and life is parking your car.  There's a place about half a mile away on Marine Boulevard, which is free overnight if you choose the right spot, and quite expensive during the day.  You have to move your car at 10am away from the free spot to a different paying spot, then move it back again at 4pm.  And if you want to load your bags, you have to go get the car, put in in the hostel's driveby and load up.  I went to do this at 8.15 am because I was expecting to have coffee in another part of Wellington with a friend at 9.30.  It was pouring with rain, windy and generally unpleasant.

On my first pass through the area my car should have been in, I noted the presence of police cars then, as I rounded the bend, four officers emerged from a lifeboat, carrying the naked, unconscious or possibly dead body of a man slung between them.  I was shocked and disturbed, obviously, but got on with minding my own business and staying out of their way.  On my second pass, I noted that they were trying to resuscitate him on the grass.  I don't know what's behind this incident, but it's the kind that ordinary citizens don't often get to witness.  Given how irritated I currently feel at London's Metropolitan Police concerning their overall attitude and conduct, it's maybe good to have a little reminder of what a cop's day can look like.  By my third pass, I would have liked a little chat with a cop myself, to ask them if they were in the habit of towing cars in this neighbourhood, but obviously, it was not a good moment. I was seriously weighing up the possibility though.  I have to admit that in reparking my car I had sort of ignored the slightly different regulations for Fridays.  I thought I had parked where there weren't any, but I wasn't absolutely sure.  Still, this is New Zealand!  I couldn't imagine them towing people for a bit of absent-minded parking.  They probably just get your cellphone number from someone who know you and offer to deliver your car to your door in exchange for a small fine.

There were obviously several possibilities for looking like an idiot here.  The one I liked best involved finding that I really had parked my car much further away than I thought, turning up approximately on time for coffee with my printmaking friend, then sharing with her the knowledge that her newfound acquaintance is an airhead. I decided I really had better walk all the way down to the end of the parade, checking every number plate.  I spotted a distant car that looked exactly like every other car around here including mine, wishing deeply and sincerely that it would be. Thankfully, it was.  It had been such a nice day yesterday, I must have fancied a long walk back.

The rest of the morning went according to plan.  I had coffee with Ali, then she took me round the local cemetery in the rain. One of the things she told me is that Wellington really is the way we suspected, and the weather tends to be like this. The cemetery is a very large and amazing place, and what really touched me was the way it includes people of many religions.  There is a large section for Chinese Christians, a bit interspersed with graves of people with English names, and probably Protestant denominations.  Then there is a very large Jewish section.  All the servicemen are together, the Greek Orthodox denomination have a whole hill, Catholic nuns and monks are buried in modest rows...unlike one of the prime ministers who offered himself a large canopy arrangement.  Ali introduced me to her friend, the one-eyed gravedigger, who keeps her supplied in dog bones... Ok, ok, just kidding!  He talks about keeping her supplied in dog bones.  He knows everything about everyone who died or is about to die in the immediate future, plus everything about the state of local politics in the cemetery workforce.  He let us in to the small chapel, with its very beautiful imported Irish stained glass windows which was really nice of him. I went back later and took some photos of the Jewish cemetery and of the one Indian memorial I could find.  I would have liked to do more, but it takes five hours to get to New Plymouth so I have to press on. 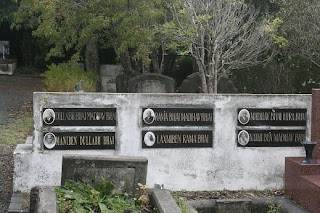 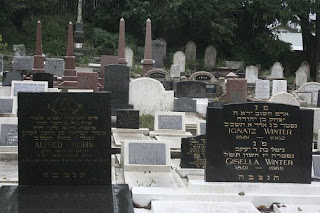