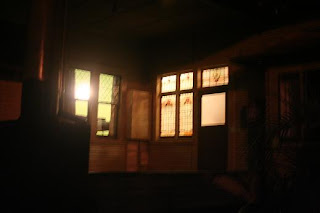 Wow, that was quite a drive. I started from Ohope, along the coast to Opotiki, then down this infamous Waioeka Gorge that they close at 5.30.  I wondered if they do that because of road works or so the kiwis can get some peace.  Anyway, it is beautiful and wild, and I had the road pretty much to myself.  But every time I caught sight of the river I noticed how brown it was against the green forest.  That was strange, as if it had been raining hard and dumped soil into the river. I hadn't noticed any rain the last few days. After a while, it occurred to me that a river gorge couldn't possibly cut through a cape from shore to shore and eventually I would have to climb a pass.  No sooner had I thought it than I started going up and small spitlets of water started hitting the windscreen.  Further ahead I could see one high hill after another stretching back into mist and dark grey cloud.  The other side of the pass was rainier but it wasn't until I reached the flat fields and vineyards around Gisborne that it got torrential.  The closer I got to the ocean, the harder it rained, until my wipers couldn't keep up. Around me the fields had turned to rectangular ponds and the ditches were full and spilling out over the road. I wondered how long this had been going on for.  Quite a while by the looks of things.

I drove through a nearly drowned Gisborne over a fat brown river and reached the YHA. Whatever it may lack in luxury it makes up for in architecture. It is the largest house I have been in for a long time - lego block motels don't count.  In the dark and the rain it gave the impression of being a sort of cream coloured Victorian Gothic pile, only made of wood.  Outside it smells of wet leaves, which for some reason, makes me think of London. Inside, it is full of people hanging out in the living room, watching television and wondering when it will stop raining (I suppose that should also make me think of London). I have a room of my own which is just as well as I have a backlog of work to do.  I am just curling up with my snacks and my computer. I certainly want no part of the rest of Gisborne in this weather.

PS: I did eventually go and see Gisborne the next day when it stopped raining and discovered that it is one of NZ's fancier towns.
at 09:53