Barcelona, Views From On High

The Sacrada Familia from the top of the Catedral. 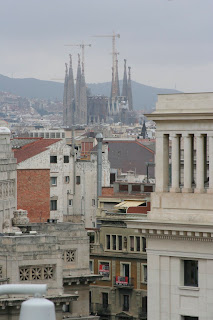 I liked both the churches and got quite interested in sketching bits of the western facade of the Sacrada Familia. There is a lot to be said for art that gives people something to look at. If it had been a warm day, I might have stayed there longer, exploring my way over the facade with a pen. But it must be said that the Sacrada Familia is currently a cross between a construction site and a circus with huge bus loads of people all over the place. I suppose they have to pay for it somehow. The Catedral charged us less to go in, it was nice and peaceful, and had a beautiful cloister garden which mixed plants and animals with architecture and sculpture. The inside was full of art of a medieval religious kind, full of gold, which is what I like. I am like a Terry Pratchett dwarf when it comes to gold, gold, gold... at least in paintings!

Antonia's goal for the day was to take the cable car that goes right past the port zone to the base of a hill on the other side of Barcelona. Today's roadschooling consisted of her finding the way to the base using the city map, and I just followed her. I think she had fun doing that. I have never been on a horizontal cable car before, but this one ends at the same altitude that it starts and it is very long. It is supported on two large towers. We had a great view of the various portuary areas: recreational, fishing and commercial. I think Mike would have loved to see that. He will have to wait till I can sort out the photos though. As you can see it is not the greatest day weather-wise or for photography, but we are still coat-free, so that is something. 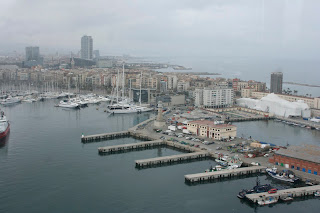 I thought we might walk around a bit in the park at the end of the cable car, but we were way too tired, so we just came back to the hostel. It is opposite the best tapas place so we won't have to go far for dinner! We are just about living on tapas, postres and sumo de naranja! What is our hostel like? Very, very basic, but OK I guess. I'm glad I had the duvet we need for the camper van, because we both slept under it last night in one single bed, otherwise we would probably have frozen. And we have no table in the room, so we are in the common room, but that is OK, as it is rather pleasant here.