This is Antonia doing what I wish I'd had time to do today: 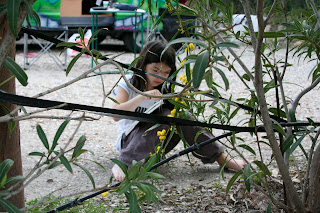 I'm not sure if Crocodile Camper is the vehicule to change my mind about automatics. I suppose if that's all you've ever driven you can't understand the sense of responsibility that the manual driver has for every whine and shudder and misjudgement made by the engine. I'm starting to remember some of my New Zealand tactics, e.g make sure that there is so much noise going on that you can't hear the engine.

It's not Crocodile Camper's fault though, that it's further to Andalousia than I would like it to be. We hit the road about 8.30, and after a while if felt like I was just driving and driving and Andalousia was getting further and further away. We crossed plain after plain and crumbling sierra after crumbling sierra, but gradually conditions started to get more desert-like, and spring was clearly further advanced. At a quick stop at midday we were obliged to change into tank tops and sandals (are you sorry for us yet?). We reached Mojacar Beach after 5 hours, including stops, and with the whole afternoon before us. 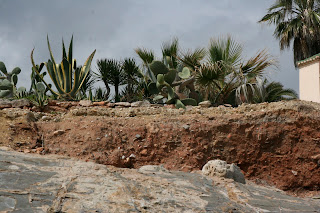 Mojacar is a spectacular white village perched high on a hill. Mojacar Beach is about a mile and half away across open, hilly country. After hanging out on the beach a bit, we walked there! We are seriously into botany, as plant life is one of the most striking differences between home and here. The only plant I can name is wild thyme, but the ground was thick with bright yellow flowers, and many other more discreet kinds. There are many palms and cactus around here, though I think they are mostly planted by humans. One cactus species is growing wild, but I don't know if it is really native. 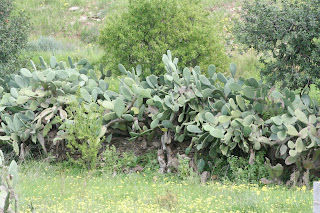 I wanted to draw plants, but I haven't really had time yet. After our little hike, we went to look for a campsite. It is really essential to have the book of campsites to find which ones will take you for only one night, as they are kind of a minority. We are in a place, it is so peaceful it's untrue! We are surrounded by mimosa (I think) in blossom and birds singing. In a minute we're driving about five minutes back to the beach and hopefully we'll find an open restaurant somewhere... or if not, a supermarket.
at 18:22