Crocodile Camper and the Motorway Monkeys 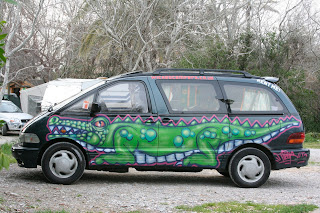 It's hard to believe, when you're walking along a moonlit beach admiring faint constellations that you were in the noise and strife of a big city only the same morning. Antonia and I were both ready for some peace and quiet, and we have come that far, and it wasn't always easy. We started the day by exploring the local covered market in Barcelona. They sell rabbit, stripped to the bone (rabbits haven't much else) but with their eyeballs still in situ! hmmm! Our little rabbit hid in the bottom of Antonia's bag.

After more ultra sweet pastries, we got a taxi driven by what appeared to be a very large monk to our designated bus stop. It was supposed to be outside a sex shop. When I eventually found this place it turned out to be extremely small, discreet, and dare I say it, tasteful. But the bus stop outside it was being torn up by big burly workers. I found the new right bus stop, we did get out camper about half an hour late, but it has a crocodile on it so that was worth waiting for. It also has right-hand drive and is an automatic so it's a good job I got some practice in New Zealand.

We ignored our kind camper dispenser's suggestion to set the gps to avoid toll roads and belted south as fast as we could. Antonia is writing a book about dragons, or she was until I called on her to try to navigate. The fruit orchards are in blossom and Spain is looking greener than I think I have ever seen it, though many of the rivers are still dry. Even though Crocodile Camper has a tendency to want to drive at 130 km/h when the speed limit is 120, I soon decided that we were not going to make the originally intended first stop. In fact we are in a campsite near Valencia. We are parked within 5 seconds of the beach, it is warm and oasis-like, though a bit humid now it is night, and we have strawberries for breakfast. 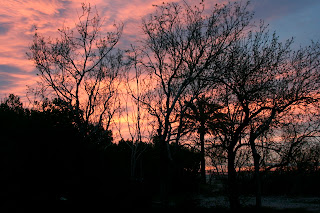