What we really did on Saturday!

Mojacar in the morning with the light in the right direction: 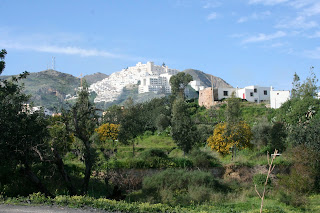 So backtracking a bit, yesterday we were in a campsite near Mojacar. We rolled down to the beach front for dinner and discovered that this end was really Englandtown. I think the red 'pueblo' climbing halfway up the hill is one of those timeshare things. There are lots of restaurants and they all serve English breakfast and fish and chips. They don't bother to even try to speak to you in any language but English. After finding lots of sea urchins and a few fish at the rocky end of the beach, we had English pub food, and went back to our nice deserted campsite for a good night's sleep.

In the morning we headed west into the badlands of Tabernas, on small roads this time. It was a really enjoyable drive through spectacular country. From where we come from, most of Spain can look pretty arid, but this is one of the few parts that is officially desert. And I think it's technically a badlands because the soil erodes very easily into canyons and pinnacles. It looks so much like the south west United States (apparently) that they used to use it to film 'paella westerns'. What we really visited was the film set. And actually the most exciting thing that happened to us was some character practicing driving his car at mach speed and skidding it all over the dirt road, just behind us. You'd think when we got to the end of the road some young guys would pour out of that car, wouldn't you? Instead a man, a woman, and four kids wielding plastic bows and arrows, who definitely could not all have been fastened in! 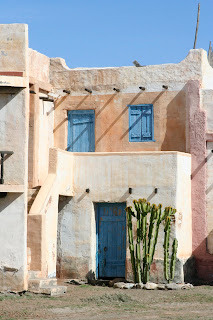 It was really fun seeing the mishmash of architecture, from New Mexico/Arizona style to what seems more like Montana or the Dakotas, the 'Indian village' with plastic wigwams and the snowy peaks of the Sierra Nevada twinkling over them, the Fort Bravo with a real ruined fortress over it in the distance. We arrived in time for the fake gunfight. It was in Spanish and apparently the dialogue was quite funny, but we just followed the plot which was completely obvious

We had to get back on the autovia as being the only direct route to Grenada. We made a brief stop at Guadix to look for troglodytic houses that are supposed to be there. I got into a bit of a traffic jam heading into town, and decided I wanted no part of it. I figured troglodytic houses were more likely to be in the hills behind me. Sure enough, when I turned around, I found a whole neighbourhood of them. Many of them have fronts that make them look just like modern houses if you don't pay attention. Higher up, several have obviously been renovated as holiday accommodation. At last, we found two ruined ones right on the road. Swallows were flitting in and out of the doorways and it seemed as though dogs might hang out there (hmmm). Apart from troglodytic houses we wanted a supermarket, but we completely failed to find one (without negotiating the traffic jam), so we continued on our way to Grenada. 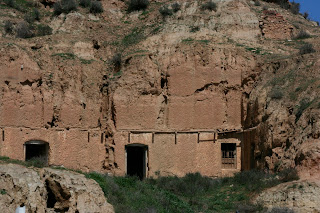 I had forgotten what a sprawl Granada is! And how impossible it seems that the section with the Alhambra is hidden away in genuinely beautiful surroundings. To get in the Alhambra, you really do have to book your tickets in advance, but it was the gardens and the Generalife that I really wanted anyway. I enjoyed them so much last time I came, and they are just as beautiful now. We explored for a while, but we were both starving. We kept seeing this little restaurant tucked away under a bridge between two sections of the garden. Eventually we decided we just had to go out and find our way there. 4.00 pm is late for lunch even by Spanish standards and we were just in time to get served a really delicious salad and scrambled eggs. We went back in the gardens and drew a bit which was very soothing. 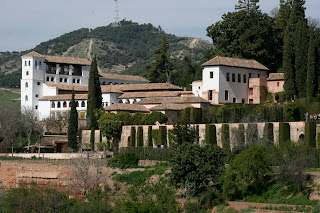 At about 6:00 pm we set the GPS (who has been christened Gamine), to navigate us to a campsite in the heart of the Granada. Personally, I still find it hard to believe urban campsites exist, but this is the second one I've been in, and its perfectly nice, although a bit busier than anywhere else we've been so far. There is a supermarket right outside, and at about 8:30 pm we remembered to go there today, since it is Sunday tomorrow. Luckjly, lots of places stay open quite late in Spain.
at 10:30