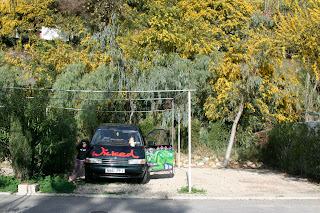 Today, we've decided to just chill out and enjoy camping. Some of the point of this trip was to test out the camper van concept to see how it might work on a longer term basis for the American trip.

Antonia and I both like the camping part of our trip. We would camp for ever... or at least until it gets cold! (I'm not sure if I can really say the same for the driving!). Crocodile Camper has everything we could possibly need. At first, we thought we would probably leave the bed out all the time, especially as we have an outdoor folding table and chairs. Then we realised that it is still cool enough some mornings or evenings that we might want somewhere to sit indoors. Fortunately, it is quite easy to change everything from night to day mode. There is plenty of space for the two of us, though I wonder how we would manage with three. I think we would need a tent as well.

Keeping everything in order does require quite a lot of discipline and organisation. There is no question of getting anything out and leaving it out. As time goes on, we are getting better at organising the van so that we don't have to rearrange all our stuff every morning and evening. Also, with just two people, we can more or less manage to each have our own private spaces, but with three that might become doubtful. Hopefully, the camper we would rent in the US would be slightly bigger. But.. how can I put this... I'm a bit concerned about how Mike would fare in such a setting. It's a shame we can't have a practice run. Of course, it would also be possible to get a real motor home, but they have disadvantages in terms of cost and maneouverability. The great thing about Crocodile is that it can pretty much go where a car can go.

Camping also requires a certain amount of discipline in keeping clean and tidy ourselves. I have been pretty strict about showers, even if they have been cold. I don't want to end up with dirty bed linen! And Antonia is starting to mutter about laundry, so maybe that will get done this afternoon.

On the roadschooling front, things are going pretty well, because Antonia has been using much of the hours on the road to work on things like maths and writing and she has been reading the books I brought for her. She is doing quite a bit of drawing from life which is important to me. I think the quality is not quite what she can do at home with fewer distractions, but that almost doesn't matter. It's good to learn to work under different pressures. I have given her most of the day off.

As for me, I'm a bit frustrated that I don't get a lot of free time, what with the driving and the organising, but that is partly because we are trying to do so much on the trip. Ideally, travelling days would be completely separate from sight-seeing and hanging out days, and we would spend two or three nights in each campsite.

As I said, driving Crocodile is a little bit of the downside. It is not a smooth ride! Apart from the fact that it is an automatic, it's engine seems really badly tuned and it feels like it backfires constantly. Driving with the window open, I realise just how horrible the engine sounds, and I'm a little embarassed to be seen in such a conspicuous vehicule while sounding like an army of teenagers on motor scooters!

What with one thing and another, we decided to scrap the part of the itinerary where we drive down to Gibraltar just to see if we can see Africa. Instead we are going towards Seville about one hour to a rural campsite where hopefully we will spend a couple of nights and see Seville and Cordoba from there.
at 10:44