Lisbon: Monument to the Discoveries 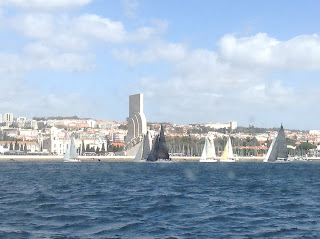 Today, I went for a nice Sunday afternoon boat ride and picnic having taken care to pick a windy day with some light swell. You wouldn't believe how quickly these boats are tearing past the Monument to the Discoveries. Let's take a closer look. 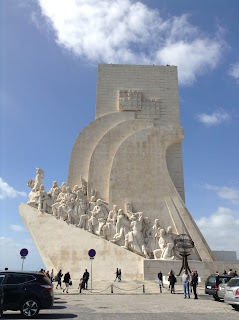 There are 33 'discoverers' aboard this ship, and the chap up front is Henry the Navigator who occupies a lead role here because, lets face it, he was a prince, a younger son of one King of Portugal and brother to the next. He stayed firmly at home however, sponsoring, promoting and organizing Portugal's first expeditions along the African coast and collecting 20% of the profits. He wanted gold and the kingdom of Prester John, but as early as the 1440s he was getting slaves as well, and I have not heard that this perturbed him. 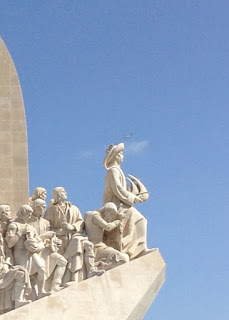 So there's that. Then there's the fact that although this is a very pretty monument, it's also a frankly nationalistic piece of propaganda, produced by an authoritarian government, the Estado Novo of 1933 to 1974. The same regime was responsible for this 100 meter high piece of religious art, you can recognize the style. From anywhere in Lisbon. And also, regrettably, from other fascist regimes of a similar era. 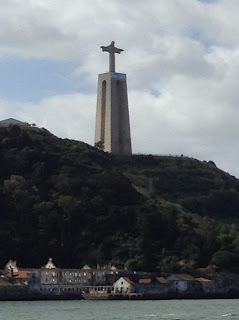 The Estado Novo was everything we are getting to know and love about authoritarianism all over again. I'll just leave this little quote by its dictator Salazar.


We are opposed to all forms of Internationalism, Communism, Socialism, Syndicalism and everything that may divide or minimize, or break up the family. We are against class warfare, irreligion and disloyalty to one’s country; against serfdom, a materialistic conception of life, and might over right.

By the time this monument was inaugurated in 1960, Salazar, who obviously forgot to mention that he also hated the now popular trend for decolonization, was on the verge of embarking on a brutal war to retain Angola. I bet he would have hated the fact that the exhibitions planned for the basement of the monument all seem to have a distinctly post-colonial flavor. This is Al Final Del Paraíso by Mexican artist, Demián Flores, very interesting and well worth looking at the finer details. 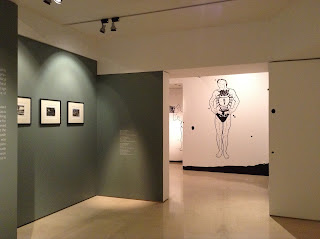 Speaking of art, there's also an artistic piece of boarding in front of the Monument to the Discoveries at the moment. I have no idea if it's permanent but it's by António Viana, and according to the blurb:


...he illuminated kings and queens, seafarers and noblemen, commoners and all those others, because, as we all know, if you want to shape a whole world, you need a little bit of everything. 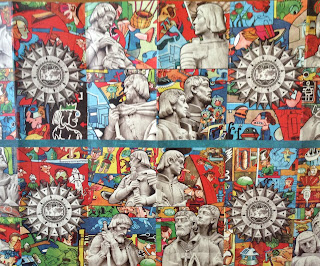 I'm not sure if there are any commoners in the monument although I don't doubt they did the bulk of the heavy lifting when it came to shaping the world. I do know that the only woman is Philippa of Lancaster, a British lady whose step-aunt was married to Chaucer - although that was due to her father marrying a commoner so it was a bit of a scandal. She was also the sister of Henry VI of England. Philippa married - was married, actually - to the King of Portugal, and is renowned - get this ! - for bearing many renowned children, including the above Henry the Navigator. That wasn't as easy as it sounds to be sure. I noticed the poor lady tried twice to name a daughter after her own mother, but neither baby survived. In reality, it seems she may also have done almost as much managing and organizing as Henry did. That's her, kneeling in front of the armillary sphere.

When I was reading up about the literature of Lisbon, I came across this article, which said:


One of the curious things about the theme of presences and absences is that they appear to be at least partially a gendered response to Lisbon. Male writers may tend to sense a presence, while female writers, as they have throughout the long tradition of Portuguese literature, often speak of an absence. 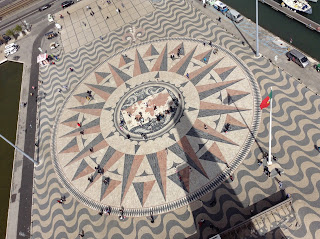 The female writers are referring to an absence of men. That's what you get when the male sex involves itself in Ages of Discovery and all that ensues. The only roses are compass roses, like the particularly massive one above, which I managed to photograph by poking my camera over the high safety wall around the windswept crow's nest of the Monument to the Discoveries.
at 11:26