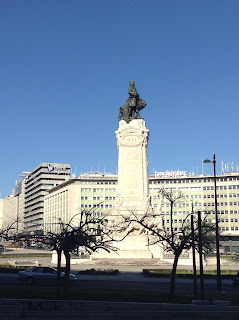 I said before that Lisbon is full of monuments. This one to the Marquis of Pombal might be fairly described as 19th century in style, so it was a bit of a surprise to learn that it dates from the early 20th century. 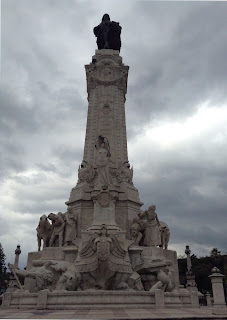 Actually, its construction was agreed in 1882, but there was a good deal of instability at the time, culminating in the assassination of the king in 1908. Work started during the turbulent First Republic and continued through the coup d'etat that led to the Estado Novo. That's a lot of very different regimes who agreed on giving Pombal a great big monument. It also had three designers and three sculptors. 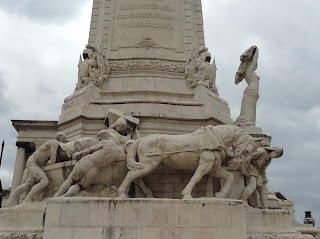 The funny thing is that Pombal served under one Portuguese monarch who let him pretty much run the country, and another who hated him so much that she placed a restraining order on him! He was an autocratic progressive reformer who dragged Portugal kicking and screaming into the Enlightenment and also proved himself an effective leader and re-builder of Lisbon after the earthquake catastrophe. 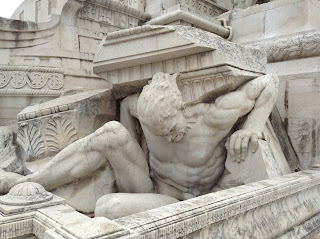 Often we don't give much thought to the iconography of these monuments: they're just a bunch of people and animals. This one repays a second glance, and is quite transparent. The renewed Lisbon rises from the earthquake and tsunami, crushing Pluto and Poseidon (bottom front) under her newfound prosperity which is founded on agricultural and marine labor (left and right flank), and ably governed by the great reformist (top) and his able collaborators (upper medallions). Athena, goddess of wisdom (and higher education) sits enthroned in the stern. 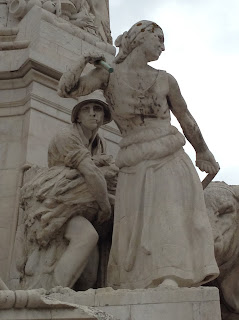 Just to make sure everyone really appreciates it, the monument is situated in Lisbon's biggest roundabout, with an avenue-esque park rising up the hill behind it. 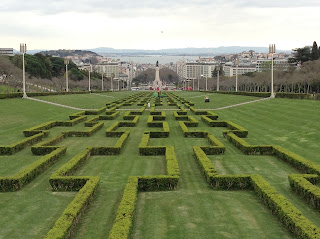